The Grench Who Stole The Holidays 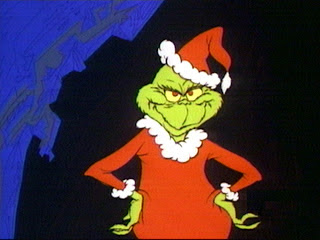 Is it just me, or did the holidays just evaporate? Well, yeah, it's nearly mid-January and clearly we're into 2005...but where did December go?!

Perhaps some of my bliss was spending two weeks around Kim & Georgia. The first week was in Mississippi. Besides my parents, visiting a couple of longtime friends, and my brother and sister dropping by...the chance to harass other folks didn't present itself. It was nice being home.

The next week - Christmas week - was spent in DC. Georgia's first Christmas...and first cold. Seems thanks goes to the sister-in-law on that one, who managed to wipe out in the entire townhouse. I was the last to have the pleasure and hacked my way through New Year's. Again, a nice week - but due to everyone being sick...and perhaps my family not being "settled" - it just didn't "feel" like Christmas. But, not every holiday has to "feel" like it should...so long as friends and family are around.

Spending New Year's Eve away from Kim...and resting in my jammies New Year's Day was such a departure from normal. Ringing in the New Year with my father-in-law...a bit different...but as he joked the following Sunday with a few select members of his church, "But I told Rick that I wasn't kissing him." Yeesh.

So, I'm fortunate to not have been snowed in here, yet. However, it's delayed...so, who knows when the fun might strike! And nothing new on the house in Jackson. Clearly, there's a reason for this delay. In the meantime, if anyone knows of someone wanting a cozy house in Jackson, let me know.

Otherwise, the notion of me coming back isn't a bad one...there's just not an open window that would allow me to support our family and Kim stay home. I await the next chapter to be revealed...