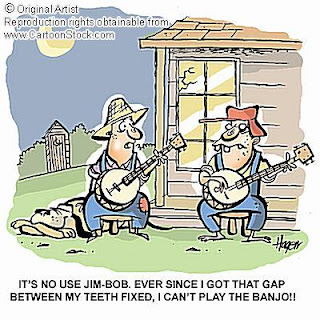 “So we had Cheneys on both sides of the family...and we don’t even live in West Virginia." Cheney then added, "You can say these things when you're not running for reelection."

The crowd got a nice chuckle out of it. Yet, this comment today is viewed as ignorant, insensitive, inappropriate, and disrespectful.

Gimmie a break. I'm a born and bred product of Mississippi which has taken labels and jokes relating to poverty, rednecks, education, lack of footwear, cooking, hunters, weight, and even inbreeding. During Katrina, more importance and attention went to Louisiana than to Mississippi which literally had its sea legs wiped away by the hurricane when towns, cities, history, and lives were erased into oblivion.

It's a joke, people! "Well, he's a public official, he shouldn't say things like that." Yes, we prefer our public officials to be politically correct robots who agree with our mode of thinking and NEVER show any sign of humanity or humor...who never make mistakes.

Now, everyone will demand he make an apology, travel to West Virginia and grovel. Please. In Central Mississippi, a city called Pearl receives the jokes for being the most redneck, hickville place around. People in Pearl make fun of Pearl. Yet, Pearl has a bunch of cool things to see and do. So, what? In the scheme of things, it's nothing given any thought.

The sadder commentary is that the majority of people (including those in West Virginia) who are upset at the remark are likely from the DC Metro and say similar jokes about West Virginia.

I salute each of you. Here's a warm glass of "shut the heck up."