Roseanne: From Grab To Gab 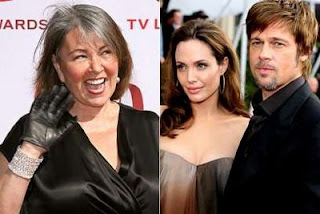 Give me a break. Here's a wonderful example of how Hollywood is cannibalistic...not that you should be surprised.

Perhaps you missed the story. Roseanne in a post to her website expressed her opinions about how Brad Pitt and Angelina Jolie use their money and thinks that Angelina should make a choice on who to endorse in the Presidential race.

Roseanne writes, "Also Miss Jolie says she likes McCain too and hasn't decided who to endorse....huh? Aren't you supposed to be somewhat enlightened, or do you not know that the African daughter you hold in every picture had parents who suffered and died because of the Republican party's worldwide economic assault on Africa over the last few decades since Reagan?" she adds.

The only reason I'd even spend time on this post is to applaud this A-List Hollywood couple for at least being open to another candidates views. Typically, Hollywood clings to liberal issues and Democrat candidates. So, for major figures in Tinseltown to go on record and even consider a Republican candidate to me is nearly unheard of.

In case you are wondering, I feel that Senator Obama is little more than great spoken words in slick clothes. So many are ready for "change" and something "different" that they seem to be focused on a candidate who is young and African-American. Dismiss how wrong he'd be for the Oval Office.

Senator McCain wouldn't be my first choice for President either. However, given the choice, I'd rather have him than Obama.

Thanks Brad and Angelina for being open-minded. Roseanne, you've faded into oblivion ever since your horrible grabbing rendition of the National Anthem. Perhaps you should grab and gab less and focus more on helping those around you.

Check out the article here