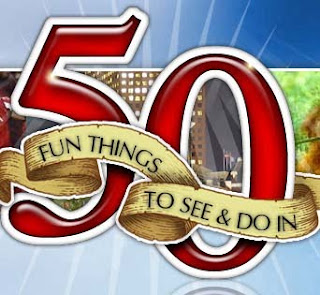 Often the rebel about such campaigns, I abstained at the time but opted last week via Twitter to share "50 Things" of interest about me.

1) Came to know Jesus Christ as my Lord and Savior the summer of 1988. It's been a wonderful journey.

3) Met Kim at Mississippi College while I was working at WHJT 93.5fm and she was at WSLI 930am (studios next door)

4) Part of our full testimony is how Kim and I were fired from our jobs at WYJS 105.9fm coming back from our honeymoon.

5) Enjoy being a dad! It gets better everyday.

6) Do not like card games. Never played growing up and they just don't do anything for me.

8) Love most science fiction - but Star Trek and Star Wars are at the top and in that order :)

10) Love the South (especially Mississippi) and hope to move family back there one day.

12) Enjoy one-on-one convo or small groups. Usually try to blend into large crowds or being the "court jester"

13) Fascinated with ocean ships of all sorts, shipwrecks, and the sea.

16) Not a big fan of Facebook Apps, so you can Poke and Super Poke all you want but I'm not gonna accept :)

21) Became a published poet while in high school.

22) Have loved ghost stories since childhood which helped me Executive Produced the "Unexplained" series. Check them out here.

23) I've seen what appeared to be a ghost cat. Eyes didn't reflect flashlight and it vanished into a bush.

24) Have taken a very odd digital photograph which I call "Creek Boy" and recorded sounds of doors slamming, thumps, taps, and a disembodied male voice whispering "Talk to me" during "Unexplained" investigations.

25) Rarely (once in a blue moon) enjoy shopping for clothes

28) Enjoy all genres of music but only listen to music in car...and then I often prefer talk radio or silence.

30) Always been a conservative (Republican) but never was into politics until the 2008 Presidential elections.

33) Sports I enjoy watching in person: hockey, football, basketball and baseball...in that order.

34) Sports I enjoy watching on TV: football and basketball.

35) Love to grill anything anytime

40) Have been on one cruise...HIGHLY recommend it!

41) Never broken a bone, been to ER, had surgery, or stayed in hospital

43) First girlfriend was a freshman in college. I was a senior in high school. Older women rock ;)

46) First gaming system: Atari 2600 - loaned it to a friend who moved away with it a few months later. Sigh

49) Been hunting once. Didn't see anything or fire gun. Probably would prefer paintball.

50) Addicted to World War II video games, but thankfully haven't had time to dwell there for years.