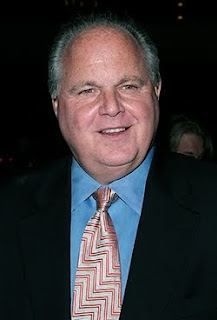 On the Eve of New Year's Eve, Rush Limbaugh is rushed to a Hawaii hospital with chest pains. News reports mention his condition as "serious" but little information is available. Hours later, it's reported that he's "resting comfortably" at the hospital.

The hours in between paint a pathetic picture of our country:

Gawker has comments such as:


Evie Havok: "I'll take a cue from Palin and say. Die, baby, die!! It probably won't happen. This dumb f*** probably has heartburn. But I can't help but wish he gets a massive heart attack. Just look at him. It's bound to happen sometime. If not today then hopefully someday soon."

@kenneth212 Rush Limbaugh was rushed to the hospital in Honolulu. Maybe Santa did get my letter.

@MelechT Rush Limbaugh was rushed to the Hospital. Just when I thought Christmas was over…

@phontigallo: I was scared of another death this year til I heard Rush Limbaugh was in the hospital. Come on 2009; don’t fail me now.

The Radio Equalizer has other sad examples of hate.

How far we have fallen as a society in the first decade of 2000. In the latter months of 2001, we saw the best of America. Our courage, compassion, resolve, determination, and love. Moving into 2010, however, we easily and frequently show that if we disagree with someone we can say whatever hateful things we want about them, including hoping they die.

Republicans and Democrats, Conservatives and Liberals...regardless of the label, all have made mistakes in words shared both spoken and written. What seems rather interesting is that when people disagree with gay marriage, global warming/climate change, health care reform, and many of Obama's policies...these people are labeled ignorant, rednecks, racists, and have death threats heaped upon them.

Calling Rush un-American, racist, right-wing, and whatever else you wish is your opinion and right. However, before you are entitled to call him anything, listen at least to one full radio show. You have no opinion until you've done that. Afterwards, if you still disagree with him, you're entitled to your opinion.

Regardless of how much you disagree with his message, you have no right to wish death on him. Save that for the terrorists who want to kill you and your family. To read about them, you should visit islam: the religion of peace.

And if you still want to disagree with what Rush is talking about, perhaps you should examine Judicial Watch, the public interest group that investigates and prosecutes government corruption. They just released its 2009 list of Washington's "Ten Most Wanted Corrupt Politicians."

Seek facts from multiple sources...the truth will always be revealed.

Agree to disagree with people sometimes...love them always.