Tales From An Unexpected Gym Rat 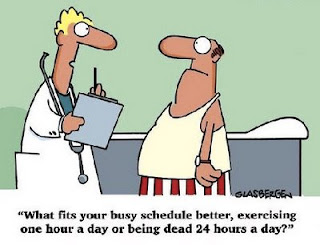 On February 29, I started going to Lifetime Fitness. Me? A gym? And after the last couple of posts I wrote about getting into the neighborhood and out of gyms? Does this make me a hypocrite? Wish-washy?

No, I'm optimistic that it makes me healthier.

A year ago, I began walking in our neighborhood. Hard to believe it's been a year. Back then, I came to the conclusion that was absolutely no reason - no excuse - for not being walking since I worked from home. The routine grew gradually from one mile to four miles with the fourth mile consisting of walking the dog.


Last month, I came to the obvious conclusion that I didn't have much to show for that year's worth of lifestyle changes. Sure, I consistently walked Monday through Friday. Sure, I changed my diet and drank more water. I lost 25 pounds - 30 actually - but those last 5 pounds came and went depending on my diet.

My routine was casual. So, my weight loss was casual. As I've said before - there's nothing wrong with that approach. Some trainers and plans might disagree, but everyone's body and goals are different. You know your body better than anyone else. Weight loss to me is simple: eat fewer calories, drink more water, and just get moving.

Yet, I had plateaued with this routine and had done nothing to adjust it. More diet tweaking might drop some pounds but the routine wasn't burning enough calories. Plus, I barely broke a sweat. Maddy in her advanced age could no longer handle her mile walk. I found myself nearly dragging her around the neighborhood in order to keep any resemblance of a decent walking pace. So, I stopped walking her in that manner and my 4 miles became 3 miles. Some days were only 2 miles. Sadly, more were becoming just a mile.

That behavior will sustain a weight but it won't lower that number.

Clearly, a change was needed and thankfully Kim had been considering moving her gym membership from Curves to Lifetime. She wanted something the family could use. So, we toured the Lifetime facility. It is jaw dropping. Check it out here.

The afternoon we joined, I told Kim, "It might be best to just have you and Georgia on the membership. I'll only go when it's raining or too cold or hot." Nearly word for word what I said. Remember, I've never been to a gym besides for local TV news promotional production. Never used one. Didn't see the benefits of one.

Almost a couple weeks pass but on February 29 it was raining. Walking around the neighborhood with an umbrella is awkward at best. So, I went to workout at a gym for the first time in my life.

What was only going to be a backup for me and perhaps save us some money by dropping me from the membership became my weekday daily routine. What I quickly learned was how much more intense a mile on a treadmill or elliptical is compared to a walk around the neighborhood. Fact is, while I may have been above 3 miles an hour in my pace around the neighborhood, the lack of consistency and resistance wasn't burning as many calories.

And how do my posts "Get Out of Gyms, Get Into Neighborhoods" and "Never Know Who's Watching You" relate to my new outlook on gyms?

I still think there's a lot of value in being neighborly and getting outside, but not everyone's neighborhood or schedule is conducive to walking. So, a gym is the only solution. There's no doubt it's an investment and not every family can afford it. This is where one has to determine what's best for them to achieve the goals best for their own body.

Monday through Friday I'm at Lifetime. Usually different hours. When I can get free from work or family obligations. I'll do the elliptical: random workout, 30 minutes, approximately 4.5mph, level 8 or 9 and the treadmill: random workout, 30 minutes, approximately 3.7mph, level 11. The Cybex machines are evil incarnate. Not interested in trying them, again. The stationary bike is...okay. Haven't tried the "Stairs To Nowhere" - 7 foot tall machines that keep you walking up steps.

Since I never imagined myself in a gym, having a regular routine is an advancement from that for me. What's next? Weights? A friend wants to get me into weights. Not now...but there could come a day. Then, there will be even less of me.

In this case...less is truly better.