May 17, 2013
Maddy the beagle came into our lives when she was found hiding in the bushes near the Spirit 106 office in Ridgeland, MS. Kim and another lady in the business complex were feeding the stray beagles in hopes of catching them to find a home.

Kim's rescue partner called and said she had a beagle in front of her office that wouldn't come out of the bushes and appeared to need help. Kim and I went to get her. We'd pull her out of the bushes, and she'd try to return. Eventually, we got her into my car and took her to our vet.

She had fleas and ticks covering her entire body. After getting an exam and flea dip, our radio station manager agreed that she could stay in an empty room at the back of the building until we determined next steps. This sweet beagle stayed there almost 3 days mostly sleeping, drinking and eating some, enjoying brief walks, but mostly sleeping and cowering every time we approached her.
Kim took her home for her Dad to see. The thought was to give her to a gentleman who raised beagles for hunting. After observing her for awhile, there was no way this beagle was going to hunt. It was clear we had a new dog!

Kim's sister - who's more a cat than dog person - named her Maddy. We'd also call her May, May-May, and I'd randomly call her Mayius Clay. Which is entirely random as Cassius Clay is Muhammad Ali's birth name, and I'm not a boxing fan. I just liked the sound of Mayius Clay.

One of my fond memories of May was coming home late one night. Then, I was working at WJTV-12. Kim was asleep in bed. As I'm entering the house, Maddy leaps onto the bed growing and barking. She's standing over Kim ready to do battle with whomever is coming into the house. Of course, this startles Kim out of a deep sleep, and she quickly hears it's me as I'm saying aloud, "Maddy, it's me!" When I enter the room with arms raised she slowly stands down and was happy to see me. We loved on her for showing us she was fully ready to defend her family.

We had many sing-alongs where one or both of us would start howling and Maddy would get revved up and join in. We'd see who could howl the longest. She outlasted me a few times. Another game was "Where's Mama?" Kim would go hide somewhere and I'd ask Maddy, "Where's Mama? Go find her!" I'd keep saying those things and Maddy would search our Jackson, MS, home to locate her. Generally, she found her quickly. But sometimes, the search needed to be more thorough. Those times, May-May would whine and whimper as she quickly tried to locate Kim. Once found, the game became tag between Kim and the May.

Maddy never gained much weight as some indoor beagles do. Between our long walks around the neighborhood and running around the house, she stayed rather trim.

We had to be cautious of her and squirrels. If she saw a squirrel, nothing would stop her from getting to it. If one was across the street and she wasn't on a leash, she'd be dashing across at full speed, regardless if a car was coming or our shouting at her. I believe this is called the Beagle Bolt!

I recall her getting through our backyard fence. We searched for hours in separate cars calling her name. Finally, Kim found her sniffing along yards in the neighborhood. The nose controlled that dog.

In late June of 2004, Maddy was a part of our trek from Mississippi to Maryland. We'd flown the two cats separately but saved Maddy for last. Any chance to ride in a car and stick her head out to sniff all the amazing smells. It didn't matter how hot or cold the weather. Ears flapping in the breeze was a great day for May.

For the longest while, we had her doghouse from Mississippi in our Maryland backyard. She never used it. Yet, we weren't too keen on leaving her in the backyard as she had a tendency to vocalize her displeasure if she thought someone was home. Leaving her loose inside wasn't an option as she shredded a bottom slat of blinds covering our front window. She had a touch of separation anxiety.

Over the past couple years, May's health declined. A heart murmur, incontinence, weight loss, cataracts, selective hearing, and doggie dementia for which she was a textbook case. Entering rooms and standing around not knowing what to do or where to go and pacing back and forth were just a few examples. Working from home the last four years has allowed me to care for Maddy in that she could sleep comfortably instead of being in a crate, be given medications, fed, and let outside. We'd go for mile-long walks around the neighborhood until she simply could no longer keep up.

Much of her final year was spent sleeping. Much of my time was spent cleaning up and treating urine spots on rugs and the hardwood floor (her diaper didn't entirely catch it), replacing puppy pads that we placed beneath her doggie beds and washing those beds. It felt more like in-home care and I had a new appreciation for in-home care personnel.

Maddy wasn't getting any better, so we concluded it was time. We debated whether to tell Georgia the full details. Our thought was to offer the explanation that we had to take Maddy to the vet, that she was old & sick, and she died there. Kim and I both thought that Georgia would resent us for killing Maddy if we explained that we made the decision to put her down. Consulting several friends, the overwhelming response was to tell her ahead of time. To allow her a chance to say goodbye. To use this as a teachable moment.

Monday, May 6, Kim made the call to North Laurel Animal hospital. The appointment was set for that Thursday, May 9 at 9:30am. The longest week began. Because G had swim practice Monday night, we chose to have a family meeting late Tuesday afternoon after homework was done. I began explaining how we all knew how old Maddy was and how her health was getting worse. Barely a minute into my spiel, G nonchalantly says, "Oh, no. You're gonna kill her." Oh, this child.

The conversation lasted a while and Georgia asked many questions. I was rather proud of how well she wanted to understand it all. She didn't cry until Kim began to and we wanted G to feel free to express herself. One of the more classic moments was G wondering what happens to the animals afterwards. Before explaining cremation, she asked, "Do they cut 'em open? Do they shred 'em?" Hmm, perhaps she's seen us shredding too many old documents.

Wednesday night, I attempted to get Maddy's paw print using an ink pad borrowed from some friends. I chuckled that the ink was red. And, yes, it looked like a bloody paw print. Gonna have to run that through the copier.

It was then clear that the only way to really get the paw clean was to give her a bath. At least she'd be clean for her appointment in the AM. The tub soon looked like a bloody mess. Red, smeared prints all over the tub. What a crime scene. A good bath lessened the color but Windex was needed for a total removal. Windex really does work wonders.

That night, as we've done for 16 years (unless I was sick or out of town), she and I took our final late-night walk. It was foggy that night which made for a haunting image: 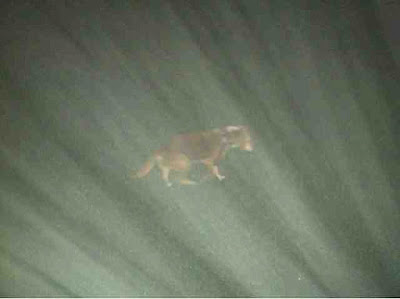 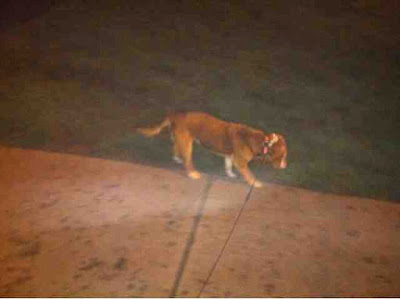 Thursday morning, G stayed home from school to go with us to the vet. That's how I was able to get their last picture together on this post. She's a brave, little girl and makes me proud everyday.

As a family, we chose to stay through the first injection which sedated Maddy and the second injection which stopped her heart. We loved on her while she was sleeping. Kisses on the head. Strokes to the paws - which she couldn't stand if she were awake. It was emotional for everyone. Georgia chose to turn away for the second injection. She stepped to the other side of the room and I stood with her. Kim at this time was talking to May and gently loving on her. Maddy's breathing became heavy. After about six or so heavy breaths, she was gone. Maddy was one tough dog even at the very end. Stubborn old fart.

She was a good dog.

Having Dr. Covert as our vet made the experience as peaceful and touching as it could be. I couldn't imagine this experience without her or without a vet that didn't cry with a family losing their pet.

Last Thursday night and Friday morning were different. Now, a week later, it's still different. A bit empty in many ways. However, this season will last a short time. Before too long, we'll have another rescue beagle to join our little family.

Thanks for being a part of our lives for 16 years! Good girl, May-May. Good girl!

January 18, 2010
Rousing from an unplanned nap near 1am Saturday, my cellphone blinks in receipt of a message. I assume it's spam to the work email account. Instead, it's a text message from 12:22am. It reads: Baby Pierce got his angel wings today at 3 o clock. News began to circulate around 4pm and trickled to Caringbridge at 11:40pm Friday night. An outpouring of love to the family was already in progress on Facebook and continued through the weekend.
12 comments
READ THE FULL STORY »