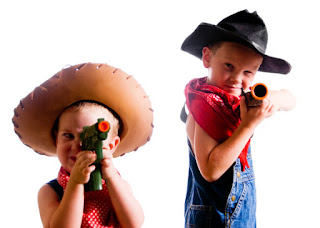 While boys may not play Cops and Robbers or Cowboys and Indians anymore, their play is often around weapons, rescue missions, exploration, and adventure. However, in today's politically correct and overly sensitive society, this type of play is nearly criminal.


Calvert County, MD - A 5-year-old boy in kindergartner shows his friend a cap gun on a school bus. His friend had a water pistol the day before and he wanted to show his friend an orange-tipped cowboy-style cap gun he got a Frontier Town near Ocean City, MD. After being questioned for more than two hours before his mother was notified and the child urinating in his pants, he was suspended for 10 days.

Silver Spring, MD - A 6-year-old boy in first grade points his finger at a classmate and says, "Pow!" School officials determined this was a threat "to shoot s student" and suspended the child for one day.


Anne Arundel County, MD - A 7-year-old boy chews his breakfast pastry into the shape of a gun and  points it at a classmate saying, "Bang! Bang!" He's suspended for two days.

But the madness isn't limited to Maryland.

Prince William County, VA - An 8-year-old boy points his finger like a gun at another student who pretended to shoot him with a bow and arrow. He serves a one day in-school suspension. The principal doesn't regard this as "appropriate play and actions in school" and that he was "threatening to harm self or others."

Snohomish County, WA - Several students are given permission by their teacher to bring Nerf guns to school for a class probability project. Two 6th graders and one 4th grader are suspended for a day.


Mount Carmel, PA - After a 5 year old girl says she's going to shoot a classmate with her Hello Kitty Bubble Gun, she's questioned for 3 hours without her mother present and then given a 10 day suspension.

Watching these videos sadden me. Is this how our public schools and society have devolved? Someone reading this is shaking their head saying, "Yes! It's because of kids being killed in schools this happens!" I disagree. It's because schools are afraid and lazy. It's because our educational system is broken.

Only fear would drive a school to a "zero tolerance" policy which becomes "zero sense" and suspends students for days over toy guns. Only laziness would create such policies which are deemed easier than teaching children common sense.

The public school system is broken because our homes are broken. Schools were never meant to be the primary teacher or caregiver for our children. That's the job of ideally a father and mother. Instead, schedules are so jammed packed with activities that there's little time for teaching and listening to children but time is made for pampering, video games, and social media. Kids come from loveless homes laced in domestic violence and substance abuse. Some kids have one parent just trying to work as hard as they can to make ends meet.

I'm seeing other snapshots of what's going on in some public school classrooms: students shouting at and tackling other students while teachers shout back. No control, respect, or fear of consequences. When I was in public school, a teacher had the authority to spank students with a paddle. If needed, they would go to the Assistant Principal or Principal and get another spanking with a paddle. Either of those would likely result in a spanking at home. That was more than enough to keep me and plenty other students out of trouble.

Some parents frown on corporal punishment today and 31 states plus D.C. ban its use in public schools, including Maryland, Virginia, Pennsylvania, and Washington - conveniently the locations of the reports above. I don't recall a single day in my public school education experience where we yelled around or at our teachers nor when they didn't have control of a classroom. Would corporal punishment in schools correct today's ridiculous behavior? Would having more control and respect in classrooms negate for children to be interrogated for hours and suspended? Our children are our future.