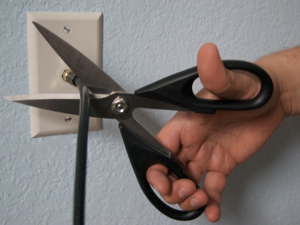 Last Saturday, we cut the proverbial cord on Comcast XFINITY®. For the first time in years, I was around no TV signal of any kind. No rabbit ears, dish, or cable. Nada. That might make some of you break out in a cold sweat. Others have applauded the effort as something they'd already accomplished.

Some friends were shocked that I'd do this during football season. But most people quickly remember I'm not the biggest sports fan. Heck, I can't even muster the interest to participate in a fantasy league I joined this season. I like football but there's no game I have to see.
Another friend gave me an HD antenna and said that he was surprised the amount of channels one could find over that free method. Problem for me is that an HD antenna doesn't work with a CRTV. Yes, the only set in the house isn't an HDTV. I'd have to get a converter box which is still a possible future option but we're agreeable at present only popping in the occasional movie or other show on DVD.

Many have asked, "What led to this decision?" It wasn't some brain tinkle, spur of the moment thought. Kim and I had talked about this for months. Would we cut it and save $100/month? Or lower it from Digital Starter to Digital Economy or maybe even Basic? Would we bundle it to save? All sorts of questions. But instead of making a decision, we delayed.

For months and months we danced around the decision. When I was ready, Kim wasn't ready. When she was ready, I wasn't ready. My concerns mostly focused on the convenience and joy of being able to relax when a short list of shows I enjoyed: Duck Dynasty, Deadliest Catch, Swamp People. random marathons, and movies of which I own the DVD but would watch with commercials! I also thought it'd be a bummer for Georgia not to have Disney channel.

Now, after a week without cable, the lack of noise and distraction is so refreshing! Georgia is able to catch some of her shows on the Disney iPad app. Most of the shows I'm interested in are streamed online with far fewer commercials.

Best of all, three things happened this week because of no TV: more communication as a family, going to bed earlier, and playing some board games. Being the creatures of habit and routine we are, sometimes the thought of change can send us into a tailspin. But I want to challenge you: cut the cable. Stop throwing money away on channels you don't watch and allowing the channels you do watch from allowing your family to communicate and bond.

You'll thank me for it!