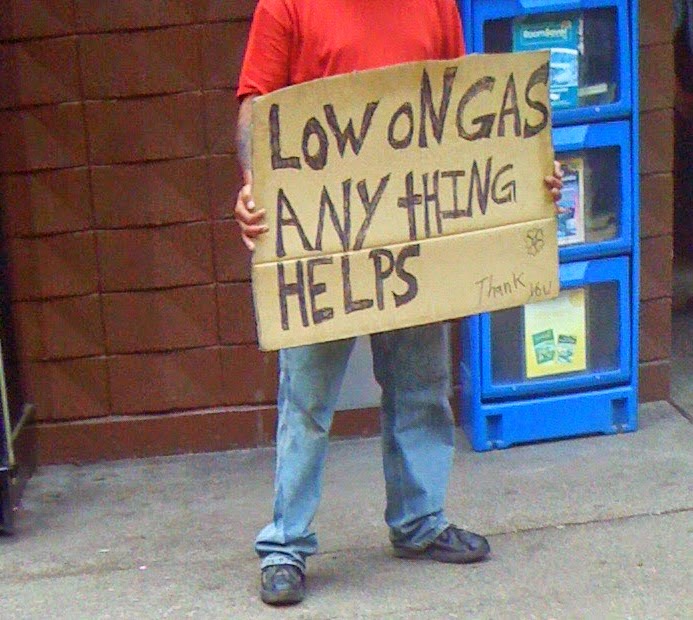 An unusual event happened Monday around 6pm, and I'm curious how you would interpret the event.

I arrived at the BP gas station in Maple Lawn and immediately noticed a man talking to another woman at a gas pump. By her body language she wasn't very receptive to what he was sharing. By his voice, he seemed sincere and somewhat desperate.

As I turned off my car's engine and finished a text on my phone, the man walked over to a woman at the pump in front of me and began sharing his story with her. As I listened to his words, I considered just staying in my car or even driving away. For a moment, that sad, natural reaction to someone interrupting my routine bubbled up. After all, I was only there to get gas and leave, not to have someone approach me with something to sell or asking for a handout.


Pumping my gas, I listen to the man's conversation with the woman. It was lasting longer than expected because she was asking him questions. It seems like the man was in the area for work and had the cash he made from the job in his car. Someone broke into his and car and stole the money along with some other items. She was asking some good questions but I don't recall them. Finally, she declared, "I wish I could help you but I'm a single mom and have two kids. Good luck, I'm sure you'll find someone to help you."

Honestly, at this moment, I wanted have the $20 in gas I needed and drive out of there, but the pumps at this station are always slow. He turned to me and seemed rather defeated.

The man wore blue jeans and a solid color (light blue?), button-up, short-sleeve shirt. His skin was tanned and somewhat weathered with a tattoo on the right side of his neck and right arm. He wore a grey, two-toned baseball cap. I was paying more attention to his face than his clothing. He kept eye-contact with me and didn't appear to be lying.

He shared his story with me and it matched what I had overheard. He was from Tennessee and had come to Maryland for some contract work on houses. He mentioned filing a police report but he concluded from the officer that there really wasn't much that could be done.

"Oh, I'm not asking you for any cash, sir. I'm just trying to get some gas to get back home to Tennessee." I asked him where his car was and he pointed to a silver PT Cruiser parked about 50 feet away. "Bring it over here and let's get you taken care of," I said without hesitation.

When he parked the car next to the pump, I saw a women in the passenger seat. His story had mentioned his wife being with him and how upset this event made her. She appeared to be upset and emotional. I didn't engage her but instead chose to focus on the man who said his name was Gary.

I didn't know how much fuel would be needed but shortly after I began filling his tank, the gas station clerk - perhaps notified by one of the women he approached - walked towards us. "Hey, man, you can't be asking customers for gas."

I don't recall Gary's exact response but it was a considerate tone and something along the lines, "I'll be leaving soon. He agreed to help me out."

As the clerk walked off, Gary mumbled, "I can't wait to get out of Maryland." I mentioned being from Mississippi and moving up here to work in DC. "There's a special kinda rudeness up here," I said with disappointment. I tried to understand from him further where the car was at when it was broken into and how he found out what had happened. He shared those details as a man who never expected to go out of town and lose wages for work he had done.

The clerk hadn't returned inside the store but was watching us from outside the front door, he started to approach, again. "It's okay, " I gestured with my right hand extended. "This situation is different and everything's okay." The clerk returned to the store and the pump shut off around $32.

Gary reached out to shake my hand and genuinely thanked me for helping. I asked if he minded if we prayed over this situation. "No, not at all," he said. So, right there, we prayed over his troubles and how all things as troubling as they be happen for a reason. I asked for protection, wisdom, and discernment. He thanked me, again, got in his car and drove away.

Were the plates Tennessee? I never noticed. Was the whole story a crock? Maybe. But maybe this man really was in trouble. $32 in gas is a small sacrifice and a chance to pray with and for Gary is priceless to me.


Watch more news videos | Latest from the US

Lord, watch over Gary and his wife and if they don't know You, may he not be able to sleep until he gets his life right with You.