See You Around, Ang! 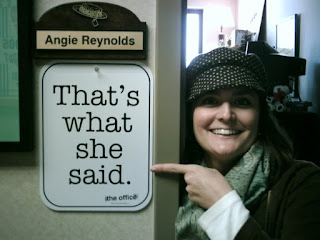 Social media and I have a love-hate relationship. I've had to adjust my consumption of Facebook, Twitter, and Google+ over the years out of necessity. There's only so much content one can consume!

While designed to connect us more, social media seems to have divided us as well...both from engaging with each other in person and over petty issues. Recently, for example, someone unfriended and blocked me for trying to support a friend going through a tough time.

But without Facebook, I wouldn't have learned that a college friend was dead from cancer.

The news hit me extra hard because I thought her struggle was going well. Plus, I recently visited where she and I went to school and worked. So many great memories of times at Mississippi College and the foundation of by brief radio career. So many friendships forged. So many memories...

Angie and I met at Mississippi College. We took some Communication classes and she worked in the office at WHJT. As a typical, red-blooded, American male, I found the idea of being pals with a beauty pageant winner rather cool. And for a brief time, I wondered if our friendship could grow further, but I respected that she only saw us as friends which we remained while at college. We lost touch for 16 years. In 2011, we became Facebook friends. It was there that I would learn of her battle with cancer but somehow I missed the details of this being her second battle.

It's natural for folks to move further out in your circles of relationships and friendships. Some remain close for life, some you communicate with every so often, and some you don't communicate with for one reason or another. Social media allows the means of staying connected but not always on the topics that matter most. Whether through work, church, school, or whatever...having a connection with people you saw on a regular basis and did life together is a good thing.

She was Wonder Woman. Anyone who battles cancer is a superhero to me. I'm comforted to know that she had a personal relationship with Jesus Christ, and that her life touched even more people after leaving Mississippi College.

While it saddens me to move another Facebook friend to the category of "Passed Away," it's good to know she's no longer in pain and is with the Heavenly Father.

See you around, Ang!

Angie Crabtree Reynolds, 44, passed away at her home in Nashville, TN on May 24, 2015, after a valiant and dignified battle with cancer, a battle she bravely won once over 12 years ago. In the very same way she lived, Angie passed surrounded by her family, friends and a lot of love. Angie was born on April 22, 1971 in Jackson, MS. She graduated from Mississippi College in Clinton, MS before moving to Nashville, TN in 1995. Angie had a passion and kindness for people and for life. She had the most infectious laugh and smile. Angie remained positive to the end throughout her year-plus battle with cancer. She loved her rescue cat Pumpkin. She loved reading, cooking and great food. Angie loved the beach, hot tea, farmer's markets, a good glass of wine, laughing hysterically, camping with her girlfriends, a good dessert, gardening, and dinner in or out with friends. What Angie loved most was her family and the time spent with them and her close friends. They all in turn learned from her kindness, compassion and devoted friendship. Her mom and dad were her best friends and she loved spending time with them. Her relationship with her parents was inspirational.

Angie is survived by husband Robert Reynolds; her mom and dad, Sylvia and Charles Crabtree of Tavares, Florida; sister Lori Crabtree Plegge and brother-in-law Cliffe Plegge of Little Rock, AR; nephews Kevin Reed of Thief River Falls, MN and Brett Reed of Little Rock, AR and a large circle of friends who love her as family.

ARRANGEMENTS: A Celebration of Life will be held Friday, May 29 from 4-6 PM at the Acuff House on the Opry Plaza near the Grand Ole Opry House (2804 Opryland Drive, Nashville, TN 37214)