Pour Life Into One Another 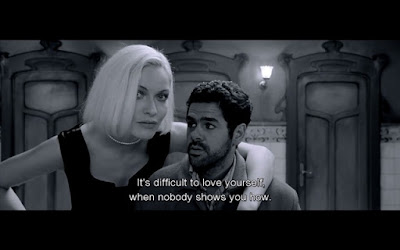 I stumbled across this video clip and this is why I love the internet! I never know on any given day what morsel of wisdom, encouragement, hilarity, or entertainment will be found.

This clip is from Angel-A, a French fantasy romantic drama film. What's unique about this video is that a man is being forced to examine himself and see his value. This something I think most people, especially guys, have difficulty doing.


Having been involved in men's ministry for years, I've seen too many men not know their own value. Too many have felt like failures, thought they were beyond God's salvation, or thought that they had disappointed important people around them. They've been told too many times by too many people that they don't match up in one way or another. They're too fat, not exciting, not ambitious, too stuck in a rut, and can't do such-and-such as good as so-and-so.

Don't misunderstand. There's a difference between giving someone a "kick in the pants" to push them into maturing or growing and just beating the encouragement out of someone.

What's so powerful about men's ministry is when guys get vulnerable and honest with themselves and their Brothers. There are few things as amazing as having a Band of Brothers to lean on when I need prayer, insight, or just to hang. When guys take time to invest in another guy, lives are radically changed. For the one being poured into, the one(s) doing the pouring, and people around them.

So, pour life into one another. Freely and frequently. Lives are depending on it.