Thanks For Trashing My New Car 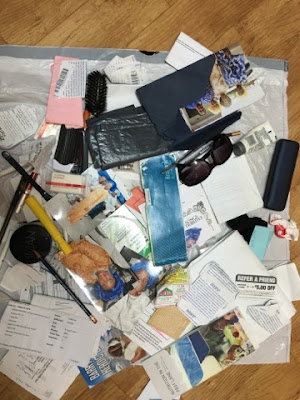 My daughter was waiting outside for me to take her to school. As I locked up the house, she walked over to the passenger door of our new Honda. Approaching her, I knew something was wrong in the way she was staring into the car. As I came beside her, it appeared someone had broken into the vehicle.

The passenger seat was covered with papers of various colors and sizes. It appeared to be trash, and none of which came from the car. I scanned the exterior body and went to the drivers door. No broken glass, no damage.

It sunk in that I must've forgotten to lock the vehicle the previous night. It's been an adjustment getting used to a "smart key" when I've always had a physical key and for the last several years a remote lock. Thankfully, there was nothing of value in the car. All that was missing were about a dollar in quarters.

Thankfully, the trash contained nothing gross or any liquids. Also, there was no damage to the interior. I put all the trash into a plastic sack and used a wet towel to wipe off the seat. Later, I determined the trash - awaiting pickup early that morning - belonged to a nearby neighbor courtsey of some mailers among the mess.

Driving to school, I prayed with G for the person(s) that did this. I share this not to boast but as a reminder (even to myself) that prayer is needed. Prayer is important. Prayer should be the first response. The person(s) that were going through my neighborhood looking for unlocked cars (they found others) could've been doing this out of desperation. Was the trash dumped on the seat a message of "Watch me dirty your new car" or a convenient way to look through the trash for valuables?

They need the love of Jesus more than my anger or frustration.

It's a shame we have to lock our homes and cars. It's a shame we cannot keep things of value in these places because even locked they can be broken into. But I believe these things are symptoms of a problem that money, laws, and polices cannot fix.

Our society's homes are broken.

Broken people make up broken families. Broken children come from single and divorced parents. Some children are basically raising themselves. With little to no guidance, love, and discipline, children are enabled by a society that says "do what makes you feel happy."

Much of our country has lost its way. We get so worked up and focused on the "civil rights" of who can marry and who can use bathrooms, that we don't even notice a child needing a mentor...or that millions of children are slaves in the sex trafficking industry.