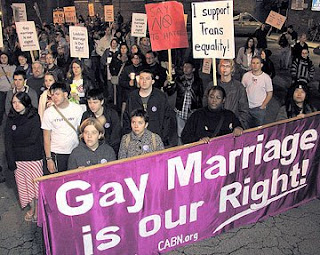 A school in California had kindergartners sign pledge cards produced by the Gay, Lesbian and Straight Education Network, or GLSEN, to not use "anti-lesbian, gay, bisexual and transgender language or slurs." Link

Why is sexual orientation a topic in kindergarten?! In today's society, it's possible that there's so little discipline or love in a home that hateful words and attitudes are byproducts. Thus, the classroom becomes the only place for a child to learn why being kind to one another is important. However, kindergartners aren't concerned with sexual orientation. Basic kindness doesn't require acknowledgement of sexuality. At best, boys think girls have cooties and vice-versa. Otherwise, their focus is on everything else. That's how it should be. It's about fun. Yet, we try and grow up our children too fast because we want them to be well-rounded and open-minded.

Over the years, gay marriage has populated the headlines more and more frequently. Recently, I saw a news clip where supporters were chanting, "Stop the hate!" Which made me pause: why is opposing gay marriage a form of hatred?

How politically correct of Webster's to stick in a (2) and "traditional marriage."

Now, let's define hate: "1a: intense hostility and aversion usually deriving from fear, anger, or sense of injury b: extreme dislike or antipathy - loathing 2: an object of hatred."

Many supporters would feel that anyone opposing gay marriage is fearful of it, closed-minded, or that they simply dislike homosexuals. What amazes me is how the simple and obvious are overlooked.

This isn't about hate. This is about trying to fit a square peg in a round hole. This is about having your cake and eating it, too. This shouldn't even be a discussion about sexual orientation. Webster shouldn't need to update its definition of marriage.

The Bible speaks of husbands loving their wives.
Ah, but some would regard the Bible has outdated and inapplicable to today's society. Some would say that the Bible isn't love letters from an adoring God and a guide for your life. So, for you, I step back from how the Bible defines marriage and supports "traditional marriage." Let's return to our simple discussion.

Seems to me that as of lately, there's a double-standard. It's perfectly acceptable to speak poorly of Christians, Republicans, or frankly anyone who disagrees with what are viewed as "mainstream ideas." Yet, when Christians voice their opinion on an issue, we are collectively or individually viewed as hateful, old-fashioned, ignorant, uneducated, radical, righteous, the religious-right, or - my personal favorite - Bible-thumpers.

When a guy tells me he's married, I see the ring on his finger, but notice he's a little flamboyant in his gestures and his clothes and hair just so...I might question whether he's married to a woman. But that's presumptuous and judging a book by the cover. What's wrong with a man or woman saying "I'm married" and instantly understanding they are wed to someone of the opposite sex like it has been for thousands of years? Why should I have to ask: "So, what's your wife...eh, husband...eh, partner's name?"

Now, if a man or woman should say, "I'm unioned" or some other phrase, what's wrong with that instantly conveying they are wed to someone of the same sex?

This seems more a case of wanting to have the benefits of traditional marriage  (which are pretty much taken care of with civil unions) and not wanting to embrace civil unions to the next level. So, instead let's redefine marriage.

A triangle is a shape with 3 points, a circle has no sides and never ends, a square has four points. There's no gray, it's black and white. It's 1's and 0's. Marriage should be husband and wife...man and woman. If a man wants to wed a man or a woman wed a woman, it's not a marriage. Who the heck is the husband and the wife and why should either have to choose? "Well, we don't choose...but we're married." Huh?

Instead, call it a union with life partners, which are already terms in place. There's such a fixation on being assimilated and accepted into society that there's no embracing the differences.

So, instead of trying to compare the fight for gay marriage to the fight to end slavery or the right to vote, focus on embracing a word that make sense. If we can invent the word "Google" and it become a verb to replace the word and concept of search, we can create a word that means gay marriage.