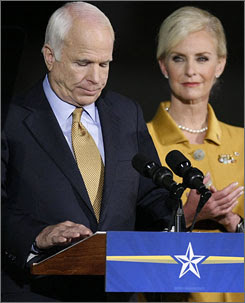 It's finally over. We as a nation have chosen our next President.
For myself and many others, it's a relief in that it's over. No more campaigning, commercials, or other pieces of info. The never-ending story has gone on for nearly 2 years. The final page is turned and it is finished.
There are good things I will take away from this election. It's encouraging and refreshing to see so many get excited about voting. The amount of youth who chose to vote is wonderful and amazing. This excitement began with the '04 elections along with online coverage resources. With this election, most of our information and updates are online. The opportunity that a black man can become President is refreshing considering the newness of this nation and the closeness of the Civil Rights movement.
There are some things about this election that disappoint me.
We have elected a man because he is black, young, and speaks well. He is everything that President Bush is not and that's all that people focused upon. Sure, there has been talk about "change" but this change is for the sake of change. I'm reminded of the children of Israel who wanted a king so badly that God allowed them to have one. He directed Samuel to anoint Saul who began as a wonderful king, but his reign ended in disobedience to God. David was anointed the new king while Saul was still in power. Will the jubilant crowds tonight regret their decision years from now?
There are very few individuals I know who align with the Democrat party who aren't liberal and aren't arrogant. Of course, every rule and stereotype has exceptions. Even so, what has surprised me is how often Obama supporters labeled McCain supporters "wrong" and were so combative to defend their stance. I was amazed how one previous colleague alluded to McCain "stealing" her friends. The implication seemed that she couldn't associate or continue being friends with anyone who supported McCain. Amazing.
Obama is no savior. He is a mere man going into an office that demands respect. He has my respect, however, you can respect someone without supporting or agreeing with them. Many cannot grasp that idea...that you can love someone but not support or agree with their choices or opinions.
In many ways, America is no longer a Christian nation because she has accepted what was once tolerated. A parent can tolerate a child's behavior in some situations but in others that behavior cannot be accepted. For years, we've become so accepting of so many things in the name of "love" and "freedom" that we've allowed right and wrong...black and white to become gray. We don't want to offend anyone, or challenge them to learn something, or apply discipline whenever needed. We can justify so many things in the name of science and progress that we don't stop to think if it's right or wrong.
I welcome being wrong about Obama. I hope he makes a great President. I pray he is a President that helps the economy, creates jobs, protects unborn life, protects marriage between a man and woman, stands against terrorists, leads the military well, doesn't needlessly yank troops from the Middle East or elsewhere, and doesn't transform us into a socialist nation. The key here is: prayer.
Don't give up and pout or plop down in your kiddie pool of disappointment and discouragement. Pray for Obama and his office. Pray for Godly discernment in everything that it does, especially since it will be challenged within 6 months from inauguration (says Joe the VP). Pray for God's wisdom.
This is the change we need.