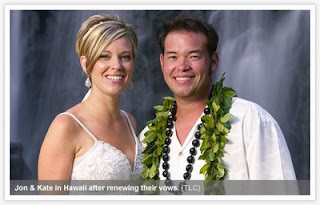 This is a bit odd for me to write a post about "Jon & Kate Plus Eight." The only reason I watch the show is if Kim has Netflixed a season (we don't get TLC) and I'm relaxing with her. Kim's a fan of it and has read Kate's book. But why this post?

This family lives in our neighbor-state Pennsylvania, Kim and I concluded that Jon's personality is very similar to mine, and I'm sick of all the trash about them on the web and in the blogosphere.


One of my talents put to great use while in broadcast TV was that of researching. I love to dig up information, uncover facts, and track down truths. So, I quickly decided to use these skills on Jon & Kate. What'd I find? That there's a lot of people out there speaking out of jealously, judgment, and ignorance.

Jealously comes into play in many ways but primarily it focuses on this family's lifestyle. Their new home, their vacations, and how they spend their time to name a few. HELLO! Let's not forget this family literally had nothing. Along comes this show and their life changes. That's called a BLESSING. What they choose to do with that blessing is their business, however, it would seem they want to continue loving their family and helping others by making their family a business.

This leads into the judgement. Kate shouldn't be doing this. Kate shouldn't be doing that. Why aren't they at home taking care of the kids? Why are they always separate? She looks unhappy. Blah, blah, blah! For one, you don't know them (nor do I but I took time to research) and you may not know they made a choice not to put their children in daycare and to always try and have one parent at home. I'm sure they have many other arrangements and agreements that we know nothing about. That's okay, that's between them.

Ah, yes, and now the ignorance. How ignorant the blogosphere is in making comments about this family. Let's face it, season one was all about what's going on in the neighborhood, at home, and just trying to cope with a family that large. But it's a REALITY-TV SHOW and having produced an Emmy-winning TV program, I know that experiments are a must. So, the family is put in this situation or this scenario is played out. Then, it's edited together in a way that is most promotable and sure to hook viewers. That's TV and sometimes it's reality but more often it's the reality of how the show is edited.

And why would anyone choose to believe some dribble from the Star?! These rags exist to exploit a shred of truth into a fabrication of saleable fiction. What is fact here? Jon Gosselin visited his mother to help her while she recovered from foot surgery. To take a break, Jon went to a local restaurant/bar. In a small town, there's often not a lot of choices for things to do. Some of the volleyball team members were there and asked to pose for pictures. Jon agreed and chatted with the team members.

This encounter becomes Jon doing beer pong at a party and making out with college girls?! I'm sure there was an eyewitness to this encounter who will gladly provide PhotoShop pictures of Jon performing these tasks. Please.

Then, there's those of you who continually stress that the children are being harmed and exploited by this show. As Jon stated, the "show is their life and their life is their show." However, the children aren't working. They are being taped. The children aren't being dragged around the country to speaking events and book signings. If exploiting the children means having a successful show because of the children, shouldn't we all be so fortunate? Let's face it, most of our lives are very boring and yet can be very exciting with only one or two children. We aren't being taped for a cable show. They are. Good for them!

Imagine having eight children. EIGHT! Imagine having very little and wondering how you are going to support your family and then in a few years having your name being a brand and having to want for very little. Imagine having to adjust to this celebrity while still learning to parent eight children and while trying to keep growing as a married couple. Imagine making mistakes and having each one possibly caught on camera and talked about across the web. How would you handle it? Could you?

Whether or not there's another season of this show isn't the issue. To me, the issue is often ourselves. What are we doing? Are we learning from their successes and failures? Most of all, are we trying to say encouraging things to our spouse and our children? Are we saying encouraging things about Jon & Kate? Words hurt and enough words can kill. Maybe not physically but certainly mentally, emotionally and spiritually.

I want to close with an email that I attempted to send to Jon but it failed due to that mailbox being full. Perhaps one day he'll see it:

I wanted to reach out to you as a husband, father, and fan of your show to say thank you. Few can imagine what you must have gone through the past four years. A father of one 4 year old daughter (yeah, I know), I can only imagine if my wife had multiple babies and while I was trying to get used to this new chapter, a camera crew began documenting many days of my life - the good, the bad, the ugly.

Your personality and humor I can totally relate. You and I may share the same personality Phlegmatic-Melancholy and my wife, Kim is, Sanguine-Choleric. We are exact opposites and beyond the age-old cliche that "opposites attract," I believe God has a plan in bringing two different personalities together. We recently Netflixed Season 1 and while I was chuckling at one of your reactions to Kate, Kim said, "He's your hero, isn't he?!" I couldn't deny it. You rock!

I haven't seen many episodes from your last season, but Kim mentioned that you had doubts about coming back for a fifth season. I learned online that indeed there will be a fifth and also about the rumors of pictures.

Taking a break from the show is a totally understandable thought. For everything there is a reason and a season. We're blessed to know your family for another season. Maybe there's a break after that and a return. Maybe it's over for good. The Lord doesn't promise us tomorrow. Let today be today and deal with tomorrow then.

As for the other, no one has any place to judge or assume. Too many want to start rumors for fame and destruction. After all, Satan would like nothing more than to destroy what ministry you guys are living for millions of viewers. A ministry it definitely is and many are praying for you.

So, again, I just wanted to thank you, Jon, for being you, for sharing a few moments of your life and your family's life with the world. For enduring the pressures, demands, scrutinies, hardships, and frustrations. And also for sharing the joys, delights, blessings, laughter, and encouragement.