What If It Were My Daughter?

January 09, 2011
Instead of rushing to judge or react to a tragic scenario, we can learn so much more when we slow down, stop, listen, think, and speak only if needed.

The shooting rampage in Arizona is a gut-wrenching and senseless tragedy. Yet, we showed our collective immaturity as a nation by wanting to place blame on others instead of first praying for the victims and their families. Rather than collecting facts, we gathered pitch forks and torches for Sarah Palin over statements and a map she posted online. Instead of being patient for details, we rushed to be a apart of the online attack blaming the T.E.A. Party for spreading "hate rhetoric."

On that dreadful Saturday, I slowed down and stopped by asking this question: what if it were my daughter? What if she had died from that assassin's bullet?


Would I be angry? Blinding rage. Would I want justice? Blood-thirsty. Would I be willing to do anything to protect my family from further harm? Without hesitation.

But would I blame Sarah Palin (or any other politician) for what they said, didn't say, or posted online? No, I'd blame the shooter. Would I blame semi-automatic weapons or the NRA for allowing the shooter to have a gun? No, because one person's misuse of a weapon doesn't discolor all guns or a group of gun advocates.

We want to blame other people, especially those with whom we have problems, for causing situations rather than either placing the responsibility where it needs to go or accepting our own part. For example, if you're feeling discontent towards your pastor, you're more likely to criticize him for not visiting you in the hospital instead of realizing that you've distanced yourself from church members who aren't mind readers. If you feel you deserve a raise at your job, you're more likely to criticize your boss or company instead of realizing you haven't really talked with the boss about your concerns. 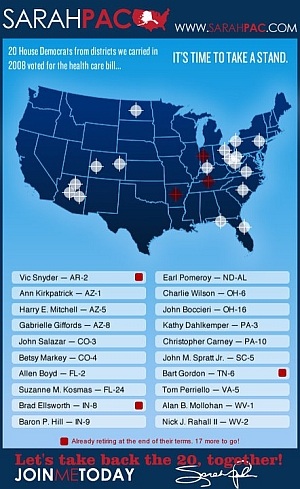 So, it's not surprising people want to blame Sarah Palin and the T.E.A. Party for this shooting because so many disagree with their statements and positions on issues. It's as if they want to toss out enough noise revolting against them so that surely other people will see how misguided Palin, the T.E.A. Party and others are with their actions.

In fact, it's quite the opposite. That sort of noise vomit shows how immature, mindless, and knee-jerk those people are with their emotional words and jaded viewpoints.

Many have commented on how irresponsible the map on the right is with its crosshairs referencing the names below, including Gabrielle Giffords. The outcry is this map encourages lunatics to shoot people. Really? So, if the map used red dots and someone used a laser-scoped rifle to kill - Palin & the map did it! If the map used X's and someone killed with a pick or knife - Palin & the map did it!

Folks, crazy doesn't need a map to commit crazy acts. Crazy will do what crazy does. However, I'm more certain than ever that less crazy would breed if children were taught to value human life. From unborn babies to elderly, all human life is sacred. When people become objects, nothing good can come of that.

Christina already made a name for herself being born on September 11, 2001. She likely would've helped change her corner of the world for the better. Instead, she's impacted that corner through her death. Born on a day of national terrorism and dying at the hand of a single terrorist, she's impacted an entire nation.

Pray for these victims, their families and friends, and our nation. Most of all, pray for Jared Loughner. Whether you believe it our not, he needs to know the love of Christ Jesus. He'll face the consequences of his actions here on earth but if he rejects God he'll face those consequences for eternity.

"Do not be quickly provoked in your spirit, for anger resides in the lap of fools." - Ecclesiastes 7:9