Your Favorite Chicken Is Not Anti-Gay 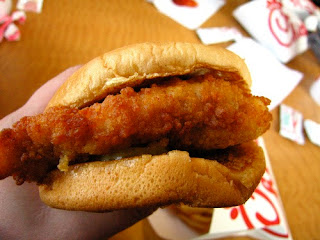 They're behaving as if Chick-fil-A's traditional-family, faith-based views are new and scandalous. Yet, their over-reaction to this issue is not only typical of gay advocates (not typical of gays, just gay advocates) but is also conducted with the same bully mentality they claim is killing gay teens. Ultimately, the approach seems to be for gaining attention to themselves and provoking reactions from "pro-traditional family" and Christian outlets.

Thus, those who preach tolerance, love, and pride are actually spewing the sort of rhetoric President Obama said should stop. Freedom of speech, religious liberty, and simple disagreement are being demonized.


"They're going in a direction we haven't seen in faith-based businesses before. This is probably the next phase of evangelical Christianity's muscle flexing."

Really, Mr. Lambert? A Pennsylvania outlet - one store - provides some sandwiches for a traditional marriage seminar and it's "a direction" unseen before? Wow.

This article also mentions how this "outcry" has sparked similar boycotts and proposals from college students to remove the restaurant from campuses, and that these actions mimic the backlash Target received when it was discovered to be making contributions to "anti-gay politicians."


Michelle Malkin points out that the writer of the Times piece isn't an unbiased journalist:

Kim Severson is an openly gay advocate of same-sex marriage equality herself and the former vice-president of the identity politics-mongering National Gay and Lesbian Journalists Association.

In a biter op-ed on gay marriage laws not changing quickly enough, she asserted: "I don't want the crumbs. I want the whole cake." Severson has voiced complaints about her social and economic status status as an unwed lesbian with a partner and child in several media publications.

None of this was disclosed in Severson's advocacy journalism hit job on Chick-fil-A. But therein lies the unofficial motto of The Gray Lady: All the ideological conflicts of interest unfit to print.

An example of word-twisting is in this article on the advocacy website Change.org:

If an organization is anti-gay -- Focus on the Family, the National Organization for Marriage, the Pennsylvania Family Institute, Exodus International -- the chances that Chick-fil-A has either donated to them, or worked with them via Chick-fil-A's charitable branch is darn near 100 percent.


I'd presume any gay advocacy group would deny they are against heteros. But they forget, pushing such extremes is a two-way street.


Instead of trying to have a discussion about the issue, the G.A.Y. blog would rather amass an archive of negative articles on Chick-fil-A and dissect statements from Dan Cathy, President and COO of Chick-fil-A, Inc.
When Cathy said that Chick-fil-A will not champion any political agendas on marriage and family, G.A.Y. concluded:


No, this political involvement claim is simply untrue. The annual marriage seminar is thoroughly tied to the political fight, even if couched under "strengthen/protect marriage" rhetoric.

“They fear an open debate on their agenda and discussion of the importance of natural marriage, they invariably seek to silence dissenting voices," Jacobs said.

The pro-family leader maintains that Chick-fil-A’s strong support for heterosexual marriage is a worthwhile cause and should be not be controversial at all.

“I wish other corporations did half as much for the natural family, as Chick-fil-A, which promotes pro-family values through its WinShape Foundation, including helping orphans and sponsoring seminars that help people strengthen their marriages and become better parents," said Jacobs.


This Washington Times article points out, the Campus Ally Network, a pro-gay campus group, helped shut down the Chick-fil-A at Indian University last month. However, when Chancellor Una Mae Reck ordered a review, the suspension was terminated.

Yet, this article from NYU says Chick-fil-A financially supports bigotry and hate:

The restaurant itself has worked with Focus on the Family (a far-right Christian nonprofit) to distribute bible CDs in its children's meals; additionally, Chick-fil-A has even donated to Focus on the Family — an organization which publicly supports corporal punishment (that's right, let's hit our kids to make 'em learn) and opposes equal rights for women, as well as homosexuality, pornography, gambling and premarital sex. The far-right group also actively works to have creationism taught alongside evolution in science classrooms and has been publicly condemned by the Anti-Defamation League for comparing some of President Obama's policies to Nazism.

The writer of this opinion piece goes on to say:

I'm not calling for a boycott of Chick-fil-A, nor am I saying that they should be kicked off campus, which students at other universities are attempting to do. But at a university known for its social progressivism, students have the right to know where their dining money is going.


How convenient to claim Chick-fil-A is spreading bigotry and hate and demonize Focus on the Family but hide behind the statement that you're not calling for a boycott or booting of the chain.

What needs to happen is for people to quit wearing their emotions on their sleeves. To quit being so sensitive. This goes for both sides. Gays want everyone to justify their lifestyle and accept it by trying to force the issue. If you want respect, be respectable. Show the kind of love you want given to you, even if you don't receive it.

For those who disagree with the homosexual lifestyle, regardless of your faith, quit trying to force gays to change. Focus on trying to love them for who they are and where they are in life. Not what you want them to be, be doing, or not doing. Never underestimate the power of talking to someone. Words are powerful but they can mislead and confuse if used poorly.

The messages that should be clear:

We as Christians should continue to promote love and love our neighbor as ourselves. Love the sinner and hate the sin takes maturity. It's easy to say but not to implement. Many Christians simply don't possess enough maturity to do this. Equally, many think their choices define who they are completely. One's choices are a mere slice of who they are. Disapproving of a sin or choice isn't hate. On the contrary, loving someone enough to care about their choices is just that - love. We can be such backwards little children sometimes.

Father, forgive us. For we know not what we do.