Stand With Me In Support of Tench Tilghman 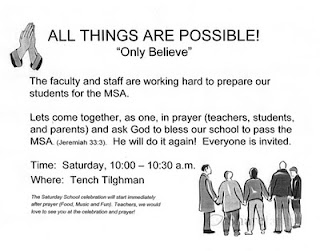 Hearing about a public elementary school taking a stand for prayer is a rarity these days. For that school to be in Maryland is an extra surprise and a bonus since it's in my backyard.

The headline Md. School Criticized for Prayer Event before Test was impossible to ignore. Reading the article, I found a school and a principal's union in support of prayer while a school system and the ACLU denounced prayer.

Tench Tilghman Elementary/Middle School held a Saturday prayer meeting on March 5. The flier promoting the event indicates it lasting for 30 minutes with a celebration of food, music, and fun following. Yet, the Baltimore City Public School System and the American Civil Liberties Union see nothing positive in holding this event. BCPSS said in a statement, "It is not appropriate for public institutions of education to promote any particular religious practice." Of course the ACLU expressed their usual rhetoric by denouncing the event as a Constitutional violation of the separation of church and state. Yet, the most ridiculous aspect of the ACLU's denouncement is from attorney David Rocah who  said, "They send a message of exclusion to people who are not of the particular faith or of any faith at all."

So, the prayer meeting excludes those who do not believe in prayer. Give Mr. Rocah a cookie.

Denouncements such as these are what make the ACLU so irrelevant and highlight the pettiness of the people they represent. In this case, the only reason the ACLU became aware of the event was due to one teacher who didn't wish to pass out the fliers to students. The event was on a Saturday - outside of normal school hours - during a time when many students are either barely awake, watching cartoons, or playing in their sporting leagues. Thus, having any event during this time is excluding quite a few students, parents, and teachers.

One teacher voices resistance and the ACLU cries foul! They continue listening to the whining complaints of the few who offer no positive solutions.

We've become a society too sensitive to rights, needs, and wants. We're more concerned with everyone getting along and keeping the peace that we've eradicated any real structure to things. In trying to be a melting pot and include everyone, we've relinquished too many boundaries.

There's nothing wrong with prayer in school. If a student doesn't wish to pray, they don't have to. Have their rights been violated? No. Did they have to listen to something they disagreed with for a few minutes? Maybe. But that's life. Get over it. But in this case, this was an event outside of school hours. And if the teacher didn't want to pass them out, she could've sat them on her desk and said, "Class, there's a flier about an event happening at the school this Saturday. Please take one if you like."

We've conditioned our society to complain about everything that makes us uncomfortable, never considering the positions of others, and empowering organizations that represent those positions.

I applaud Tench Tilghman Elementary/Middle School for this simple stand for prayer and hope more schools will do the same. Prayer is powerful and many children aren't exposed to its life-changing benefits. It's possible that such an event could plant a seed that could lead a child to Christ - the most important decision of their life.

Please show your support to Tench Tilghman Elementary/Middle School in one or all of the following ways:

- Pray for Principal Jael Yon, the staff, students, and parents. Pray they be encouraged during this time and that God be glorified.

- Pray for BCPSS and its leaders to soften their hearts and support this member school in its decisions to positively impact lives.

- Pray for the Maryland ACLU to focus on more relevant matters and to be shown the Truth that is around them everyday.

- Consider sending an email of support to Tench Tilghman Elementary/Middle School and Principal Jael Yon. Express your appreciation for their stand for prayer.

- Consider sending an email of support to Baltimore City Public School Administrators and Supervisors Association President Jimmy Gittings for his support of this prayer meeting.

- Consider also sending an email to BCPSS Chief Executive Officer Andrés A. Alonso and the ACLU of Maryland expressing your disappointment on their denouncement of Tench Tilghman Elementary/Middle School's prayer meeting.


Read more about it at BaltimoreSun.com