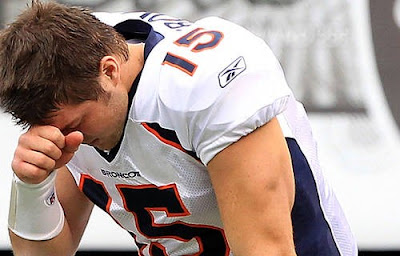 Anyone who knows me well enough knows I'm not much of a sports fan. I never played high school or college ball. I couldn't explain a single play or strategy in any sport. Never shot hoops after school or played football in the yard with friends. Golf's the only game I tried to play - emphasis on tried. Rarely is a game on the TV in our house. No team would I really consider "my team." I've never worn or owned a jersey. The only sports logo in my closet is that of Southern Miss on a nice gold polo shirt given to me by a friend.

I'm pretty much as unathletic a guy as they come. So, for me to have a sports opinion is rare. But in the case of Tim Tebow, there's much to say.


Yeah, I know. Tebow's history. He's out of the media spotlight since the Broncos were punted from the championships. However, if you're a sports fan, you should be thrilled that for once here's the real deal. Tebow's not some punk collecting a paycheck, running around getting drunk, partying it up, and acting like a thug. Here's a real role model. Kids still need those. Heck, adults need them, too.


But perhaps we've forgotten what is a real role model. Or maybe we really don't want one. After all, Tebow appears to be an actual gentleman. He shows kindness and integrity. He's even turned down multi-million dollar endorsements because he wanted to focus on football and not have those distractions.

Here's a guy that when asked how the win over the Steelers felt, he didn't say he was going to Disney World and praise himself. Instead, he focused on one little girl.


“Football is amazing. We love it. We're so passionate about it,” Tebow said in his postgame news conference Sunday. “But the real win, at least I would say today, is being able to comfort a girl who has gone through 73 surgeries before the game and get a chance to go hang out with her now.


“That's the biggest win of the day. They're both exciting, but that's what I'm even more proud of."

Read more about that here.

What Tebow knows is that he couldn't help or encourage this child and many others if he wasn't doing what he's doing. And what he's doing he considers a blessing from God. Thus, he gives Him praise.

Have we become so jaded that when a sports figure or celebrity appears to be successful and a gentleman that we expect them to fail? That they can't be for real. They must have some skeleton in their closet! We stand on the sidelines waiting for them to fail.

If you're a Christian, you should be thrilled that here's a guy that's unashamedly sharing his faith. He's had John 3:16 painted on his eye-black, he tweets and Facebooks scripture references, and he praises not just God, but also Jesus,  every chance he gets.

Have we become so comfortable in our own private faith that we want Tebow to tone it down? To shut up about his faith? One writer even compared Tebow to praying like a Pharisee. Really? Maybe this writer missed that Pharisees wanted people to see how righteous they were by their long, drawn-out, well-spoken, emotion prayers. Their intent was to bring attention to themselves, not God. Certainly not to Jesus.

But one could say, "But look at him! He's kneeling in front of everyone! He's praying! He's praising God! He should be doing that with no cameras around!"

I'd say that Tebow would be doing what he was doing whether no one was in the stands and no cameras were on him. That's genuine faith and that proves where his motives are focused.

I read several tweets after that Steeler win that essentially said, "God doesn't care about football." What was the motivation of sharing such a phrase? Does God really care about the game of football? Does He care who wins or loses? No, He does not. If a team with a Christian quarterback loses, does that mean that they're no longer in favor with the Heavenly Father and that prayer didn't work? Nope. It's a game. Someone wins. Someone loses.

I wonder if those who don't support Tebow - Christians and not - are essentially saying what John Oliver has said:


“I dislike Robert Mugabe. I hate Tim Tebow. If I was in a room with Tim Tebow and Bin Laden and I had a gun with one bullet in it, I’d shoot Bin Laden. I’m not a monster. But if I had two bullets–I’d shoot Tim Tebow first.

“How dare you thank God before thanking your offensive line…If I was an offensive lineman for Tim Tebow and I heard him thank God instead of thanking me at the end of the game I’d find myself lining up for the following game and say ‘oh Tim I heard your press conference at the end of the game last week, great to hear Jesus get a shoutout. Wasn’t he fantastic for us? Wasn’t God great, especially in that fourth quarter?”

How sad. How sad to publicly say you hate someone - joking or not. How repulsive you'd say you'd kill someone. And over what? Because he praises God? Hmm, that was done over 2000 years ago.

And Christians may forget what Christ said in John 15:


“If the world hates you, remember that it hated me first. The world would love you as one of its own if you belonged to it, but you are no longer part of the world. I chose you to come out of the world, so it hates you. Do you remember what I told you? ‘A slave is not greater than the master.’ Since they persecuted me, naturally they will persecute you. And if they had listened to me, they would listen to you. They will do all this to you because of me, for they have rejected the one who sent me. They would not be guilty if I had not come and spoken to them. But now they have no excuse for their sin. Anyone who hates me also hates my Father. If I hadn’t done such miraculous signs among them that no one else could do, they would not be guilty. But as it is, they have seen everything I did, yet they still hate me and my Father. This fulfills what is written in their Scriptures: ‘They hated me without cause.’

Tebow isn't surprised that he's being mocked. People hated Christ without cause. People hate Christians today without cause even to the point of killing them. So, expect to be mocked. And be encouraged by it. It means you're getting people's attention.

But now that Tebow's out of the playoffs, all the chatter will die down. Not the mocking. Nope, that's been going on for 2000 years. People haven't changed much.

But maybe...just maybe the better thing to do...is respect the man, let him play football, say good for him, and pray that God keeps him safe. Not a bad prayer for anyone, whether you like that person or not.