No Homeless In The Country 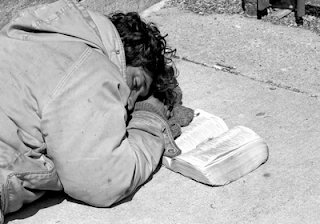 Recently, I attended work meetings in New York City. I never grow tired of the complexities of NYC. There's a lot there. Every block can be sensory overload. Local shops, artwork, construction, architecture, and frequently homeless people.

Amongst all the hustle and bustle, the refined and wealthy, and the multiple complexities are people of simple living. Barely living. You might wish to not think about the homeless, however, they're impossible to ignore even in the busyness of the city. Yet, what is most perplexing to me is the sheer number we see and the infinite number we don't see, and all of these citizens are within yards of shelter and food. It's as if our advancement as a society creates in its wake people who cannot conform or benefit from that advancement. Thus, they haven't the means to sustain a home or their families and become invisible on the cityscape.

Barely a block from a hotel, two men rest in sleeping bags. They borrow the awning of a building for overnight shelter from the rain and wind.

Meer steps from restaurants of every shape and cuisine, a man jingles coins in a cup asking for money.

Think about it. I cannot recall once during my years of visiting family in the country or miles upon miles of driving through rural areas ever seeing anymore who appeared to be homeless.

The differences between the city and the country - urban and rural - are numerous. There's more living space, business, and activities in the city. There's more scenery, comradery, and simplicity in the country.

Both Deuteronomy 15:11 and Mark 14:7 speak to the poor always being among us. It's a fact thousands of years old. Yet, I cannot help but think that in our advancement as a society we are neglecting an important characteristic: compassion. If we were more compassionate and loving, less selfish and focused on our own needs, perhaps something found more abundant in the country - community - would be found more often in our cities.

Would this remove homelessness? Perhaps not. But just as Christ indicated that widows and orphans were our responsibility - not the government and not only the Church - I can only imagine we have some responsibility in preventing people from losing their shelters.

What are your thoughts on these invisible souls?