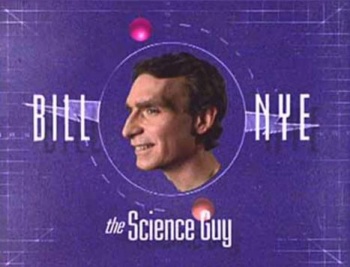 I used to watch Bill Nye the Science Guy. He was quirky and made learning about science fun. Today, it seems Bill's another example of one who is scientifically-minded promoting evolution as the only plausible worldview. And if you don't believe in evolution, he thinks you're stupid but free to believe what you want. Just don't teach your children to think like you.


"Denial of evolution is unique to the United States," Nye says. "I mean, we're the world's most advanced technological—I mean, you could say Japan—but generally, the United States is where most of the innovations still happens. People still move to the United States. And that's largely because of the intellectual capital we have, the general understanding of science. When you have a portion of the population that doesn't believe in that, it holds everybody back, really. Evolution is the fundamental idea in all of life science, in all of biology."

Wait, I'm holding back the United States because of my worldview? Watch the video for his other thoughts:

So, according to Nye, if I don't believe in evolution then I don't understand dinosaurs and radiation. Plus, my votes and money aren't going to worthy causes, and I can't build things or solve problems.

Basically, Nye is saying that anyone who believes in creationism or intelligent design is stupid. This isn't a surprise. Christ said in John 15: 18-19:

But remember, disagreement is not hate. The world is trying to color disagreement as hate, but I can disagree with you all day long and not hate you. What Christ is referring to in that verse is real hate. The kind that wants to do a person physical harm, shut them up, make an example out of them, and often kill them.

Evolution, creationism, & intelligent design are three different worldviews and yet they are related. In fact, everything about the world is evolving! Yet, the theory of evolution - basically implying that we came from a pool of goo and randomly came to existence - is just that...a theory. Creationism, the opposite of evolution, focuses on the Biblical account of life as described in Genesis. Intelligent design isn't a blend of the two but doesn't focus on God being the intelligence either. By this theory, a higher power is responsible for the design which could be God or it could be aliens. And yet, Ben Stein's documentary on the resistence to intelligent design is a fascinating watch:

I can respect Nye for believing in evolution. However, he crosses a line when he reveals his intolerance for my views and suggests I don't share them with my children.

All of this makes life a mystery and like an amazing painting or Scripture, we can return to it and find something new...some minor detail...something we looked over countless times before and suddenly it's plain as day.

To read more about why this is so important, read about Biblical Creationism here.