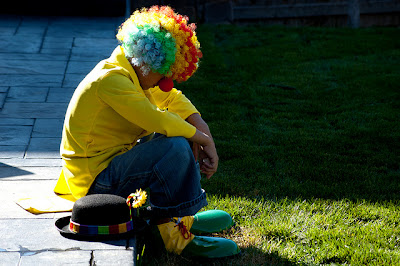 At some point today, you'll likely stumble upon discouragement. It's normal and should be expected. You may read, hear, or see something troubling. You'll become discouraged. What you do with that discouragement offers some insights into you.

Will you try to learn from the discouragement by reflecting on your own expectations and perspectives? Or will you use the discouragement to justify your bad mood and why you're acting like a spoiled child? For example, I've been a member of Lifetime Fitness since March. When I had a health assessment in May, my weight was 250. Only last month, had I reached 240. In perspective, that's 30 pounds less in total from my healthier beginnings. That stat's an achievement. Yet, 10 pounds in 3 months isn't something to write home about. Plus, I'm back to 250.

I could feel defeated, frustrated, overwhelmed or a variety of negative reactions. Instead, I chose to realize some positive aspects. My weight loss has slowed due to building up muscle. But it's also slower because my caloric intake isn't as low as it needs to be and I don't consume as much daily water as needed. Then, there's a few too many samplings of candy corn.

A good way to fight discouragement is with facts AND action. Sometimes one can have facts but not act upon them. Knowing what needs to be done and not doing it is pretty much foolishness.

Also with those facts, the weight is only going to follow my activities. If I want quicker results, I have to work longer and harder. Else, the pace will be slow. The only way to keep the pace steady is not to camp out at too many calories and carbs such as breads and sweets.

I can feel and see the changes. Other people see the changes. Some dietary alterations would easily speed up the weight loss. But I still get discouraged. Why? Because I, like perhaps you, base my success on specific instant feedback. In this example, it's not enough that I can see and feel physical changes. Not enough that several people are affirming the changes. The change isn't real unless the scale says it is.

Yup, I'm basing my success on a tool which can have its results skewed by the type of floor it's upon and even the clothes I'm wearing.

I'm impatient. I want those numbers to continue moving downward. Yet, the workouts have to happen, the water must be consumed, the calories must not be over indulged. Yet, it's just so easy to eat. Chew, chew, taste, taste and voila! You've either fueled your body well or poorly.

Add to that, the discouragement of the process taking so long. We live in an instantaneous society. There's an app for anything we need. What's sad is that the food we can so easily get can be eaten in excess. This is why we're fat. It's so easy to eat too much processed foods but requires four times the effort to lose the weight gained.

This is why so many healthy efforts fail. Expectations aren't met and we focus on the negative. Focusing on the positive challenges me to use the limited gym time I have to its fullest - to burn more calories, to build more muscle, to continue eating better, to drink more water, and to keep at it.