Be Bold To Do More For The Least 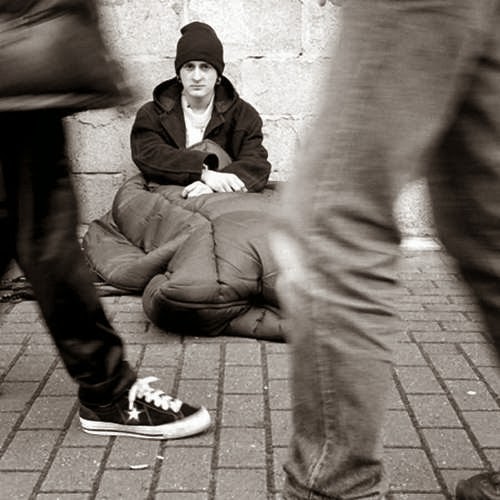 I've gotta say, there's just something about ole San Fran. It really is a cool, big, little city. Granted, I haven't seen perhaps more than a fourth of it in my three trips but it delights me with each visit. The weather is pleasant, topography and sights are stunning, people are friendly, sidewalks are wide, and the city feels relatively clean compared to much of NYC or DC.

However, there's a plight in San Fran of homelessness. Sure, it's everywhere and maybe moreso due to the economy. Seeing one homeless person is too many, but I couldn't walk a block in San Fran without passing by at least one or two unfortunate souls.


Passing by. There's the phrase to focus on: I passed them by.

Most are sitting on sidewalks with cups, hats, or anything to collect handouts. Others are disabled and in wheelchairs. I recall a man and woman sitting together with a sign. I was walking in a small group and couldn't make out the words but I didn't try to either. There eyes were fixed in our direction. I never made eye contact.

Another snapshot: I'm walking pass an open black plastic take-out container from a restaurant placed upon a subway entrance railing. It contained a white plastic fork resting in what appeared to be rice from an unfinished meal. After completing my errand, I walked the same route to see a tall, slender man pick up the container, shrug at its contents, and begin eating the rice.

Another snapshot: I'm passing a homeless man sitting on the sidewalk with his back resting on the front a theatre plastered with signs for "Wicked" currently on stage. He appeared to be asleep or passed out. His wordly belongings near. It must've been time for patrons to begin arriving for the show since a bulky security guard came from the lobby, walked by me and began clapping his hands shouting, "Ok, buddy, time to go! Let's get up! Come on! Time to go!"

I looked over my shoulder to see the man barely in motion and the security guard standing over him. "The streets are his home but he can only be on certain parts of the street at certain times," I thought to myself.


'For I was hungry, and you gave Me something to eat; I was thirsty, and you gave Me something to drink; I was a stranger, and you invited Me in; naked, and you clothed Me; I was sick, and you visited Me; I was in prison, and you came to Me.' Then the righteous will answer Him, 'Lord, when did we see You hungry, and feed You, or thirsty, and give You something to drink? And when did we see You a stranger, and invite You in, or naked, and clothe You? When did we see You sick, or in prison, and come to You?' The King will answer and say to them, 'Truly I say to you, to the extent that you did it to one of these brothers of Mine, even the least of them, you did it to Me.'

As Children of God, we're called to help those less fortunate than us. We may not be able to help everyone. But we can help someone. Or several someones, one at a time.

Let's be bold to do more for the least.