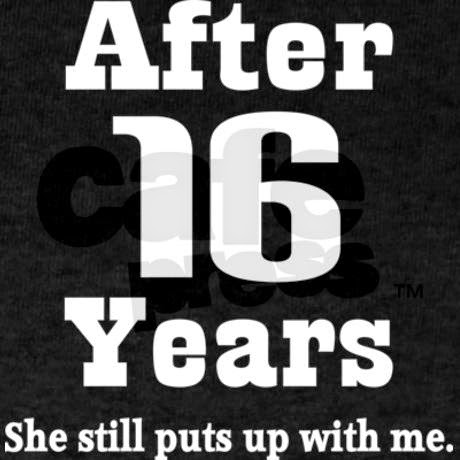 Today, Kim and I celebrate sixteen years of marriage. Sixteen. Sweet Sixteen. That seems like a lot and yet it seems so short. Anniversaries tend to evoke reflections on where I've been physically or emotionally. Ideally, I can see where I've matured and grown. Where I've learned from my mistakes. I feel very lucky - more accurately very blessed - to be married to the woman who completes me in so many ways.

16 years ago, I was moving into my third home. My first home was where I grew up and where my mom & dad live now. Second was an apartment in Ridgeland, Mississippi, I shared with college-friend Reid Vance. Third was the house Kim had spent most of her high school and college years with her family in the Woodland Hills area of Jackson. Now, my fourth home is a two-story townhouse in Maryland half the size of the Jackson house.

16 years ago, we were going on our first - and thus far only - cruise. If you've never been, do try and make the time. A cruise is a wonderful experience. Hopefully, we can plan for another.

16 years ago, I was going to Florida and out of country for the first time. Part of our honeymoon was touring some of Florida including Miami. Being a fan of Miami Vice, the sights were glorious and I would've loved to have stayed longer. Our trip to the Bahamas would be my first - and thus far only - need for a passport. Again, hopefully we can visit out of the states, again.

16 years ago, I had never moved outside of Central Mississippi. In June 2004, I began our relocation to Maryland. I lived with my inlaws for a year while traveling often to our home in Jackson to visit Kim and our new baby girl, Georgia. If Kim had been any other woman and Georgia any other baby, I'm not sure how that year would've ended. So often, I wanted to quit the job God had given me so that Kim could stay home with Georgia. Our home wasn't selling and until it did, we couldn't relocate to Maryland. I was missing them and frustrated. Yet, God had a plan and a timing. He always does. We just have to be still and know that He is God.

16 years ago, I weighed 40 pounds less. Yeah. Really. So what was it? Moving out of state? Becoming a parent? Having a less stressful job? All the above? Maybe it's just getting older. For the past year, I've gone to the gym at least 3 days a week for at least 45 minutes. I've tried to eat better and less while moving more and drinking more water.

The world has changed in so many ways since 1997. Cars have touchscreens and are electric-powered. Phones have touchscreens, too, and are barely used to talk anymore between social media, texting, photos, video, and every app imaginable. The world is bigger and smaller and scarier. Yet, some things never change such as God's love for us and my desire to be the best husband and father I can be.

It hasn't been easy - nothing worth doing ever is - but it has been an amazing journey! I'm blessed to be on that journey with you! Thanks for loving our family.