My Eye Has A Nipple 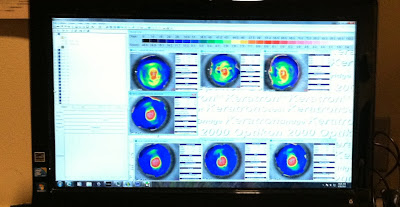 "You have what we call a nipple cone," the optometrist told me. It was difficult not to be 12 years old at that comment. Yet, it got me to thinking about my future vision.

Shortly after getting married, my vision started changing. I needed glasses. Yeah, it's great joke material but the fact is I never considered glasses or contact lens before then.

I don't recall precisely when Dr. Williams diagnosed me with Keratoconus but I'll always be grateful that he did. Keratoconus is an eye disease that affects the structure of the cornea. The cornea's shape slowly changes from the normal round shape to a cone shape. This was the first time I'd been diagnosed with anything permanent or a "condition." At the time, he indicated that contact lens weren't a recommended option as I would have to wear gas-permeable hard lenses. These would be uncomfortable and could further weaken the cornea. Surgery was not an option. LASIK, for example,  could have devastating results. I assured him that the idea of hard plastic on or slicing open my eyes weren't ideas that I was ready to consider. Glasses would be just fine.

One curious fact that Dr. Williams shared was that Keratoconus patients seem to have a history of rubbing their eyes. He was clear to not attribute eye-rubbing as the cause of Keratoconus, only that patients had that in common. My suspicion is that eye fatigue, headaches, and allergies  - my reasons for rubbing my eyes - helped progress the condition.

Now, more than a decade later, I've had three different eyeglass prescriptions. While I've efforted not to rub my eyes too often or rub across the cornea, I'm certain that I've done this numerous times. Perhaps this has caused my left eye to worsen. Or perhaps it was going to do this on its own.

At an eye exam in January this year, eyeglasses seemed to have run their course. Dr. Wertlieb couldn't find a setting that would help my left eye. She felt it was time to visit a specialist and consider contact lens.

A few weeks later, I saw Dr. Glasser who felt that my condition was worsening which was surprising since Keratoconus progression tends to slow and hault as one gets older. He recommended corneal cross linking, a surgery where the cornea's outer layer is scraped away, riboflavin drops are added over several minutes, and ultraviolet light is used over several minutes to complete the process. It's a new procedure, not covered by insurance, and essentially ages the cornea. However, it's suppose to stop any further progression of the disease and prevent one from needing a corneal transplant.

Beyond the cross linking, he felt I should get fitted for contact lenses which would be handled in the same office by Dr. Sirotkin. The following week, I visited Dr. Sirotkin. After a few tests, he was ready with the first trial lens for my right eye. The experience wasn't too bad. There was the random sensation of something sitting on my eye but nothing too bad. Then, he placed a trial lens on my left eye. This lens was steeper and I could feel it with every blink. My eye watered. Looking down, blinking, closing my eyes - all were temporary reliefs. More watering and I had to resist the urge to pull it off my eye.

Dr. Sirotkin used no numbing drops to make this a real-world test. When he examined my eyes, the right lens was off center. I had no clue of this. He attempted multiple times to adjust it for me but I wasn't cooperating enough. As much as I tried to comply with keeping my right eye open or looking where he wanted, it was a struggle. He opted to add numbing drops and all became quite comfortable within a matter of seconds.

After centering the right lens and examining both eyes, he determined the left was too steep of a lens and the right wasn't a good fit either. So, out with those and another two were placed in. The right lens was smaller and the left lens less steep. With numbing drops, this process was quicker but I was still thinking, "How long will it take to get used to these WITHOUT drops? Or will I?"

He tried and second and third time which ended with the right lens being a decent fit. However, the left eye would require a nipple cone fitting kit to provide a lens. Yes, I chuckled. This kit is designed to provide the best lens fit for those with Keratoconus and a nipple cone. The kit would be in around two weeks, so my appointment was scheduled for three weeks later.

The following day, my eyes were sore and I felt as if I lost a fight. I'm sure the tree pollen in the air didn't help but clearly my eyes were fatigued. Again, I'm sure I could get used to contacts but I had serious doubts of giving into needing them just yet.

Three weeks passed and after confirming the kit had come in I returned to the office on my scheduled day. After three fitting attempts, the doc was satisfied with what he was observing. Could I see well? Yes. Was it better than with glasses? Yes but with discomfort and once these lenses came in, I coudln't leave with them until I took a class and put them in and took them out myself.

After leaving the appointment, I mentioned to the office that I wanted to know the cost of the lens or at least how much insurance was going to cover. Two months passed. No communication from the office. I sent an emailed. No response. After a couple weeks, I emailed, again. This time, a reply. The lens would be $500 but there was no information on my insurance.

A few weeks later, I returned to Dr. Wertlieb to share the details of the experience. I explained to her that I preferred to try for glasses one more time. She managed to find a setting that was rather amazing. I notified Dr. Sirotkin's office that I didn't want the lens. Next, I need to find out how much these glasses are going to cost. Maybe I can use my same frames. That'd be ideal.

What my future vision may become is unknown. What I do know is that God knows that I love my sight, He has provided trained and talented people to help me, and whatever happens I just need to praise Him. Thank you, Lord, for my sight!