Squirrel! Part 4: Whatever Happened With That Squirrel? 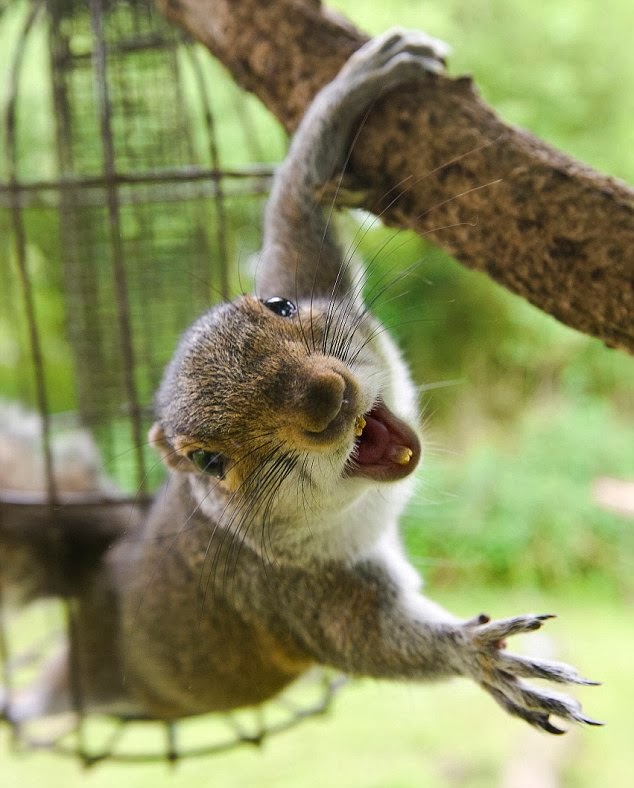 It's a bit unfathomable to me that I've had squirrels in my attic for three months. Three. Months. Since late November, we've heard the random scratching that have produced two small holes in the ceiling of G's closet, two in her bedroom, and three tiny holes in our bedroom. It's only expected and reasonable that friends and family would be questioning, "Whatever happened with that squirrel?"

2013 ended with me signing a contract with Home Paramount Pest Control. We've used them since 2006 for termite control and have been pleased with that service. Since we first heard the squirrel, I debated - mostly with myself - about using a company to get rid of these furry fiends. Dropping around $500 just seemed rather unreasonable, especially when methods of these companies appeared to consist only of setting traps outdoors and not actually going into the attic, flushing them out, and sealing the breeches in the house.


WEEK ONE
Although the contract began on 12/30, that was a holiday week. The Home Paramount tech placed two closed traps in the yard "so the squirrels could get used to them." I was told they also closed the traps on Fridays and reopened on Mondays. Thus, when Thursday rolled around and the traps were sitting in several inches of snow, that week was a loss.

WEEK TWO
The following Monday, 7 days later, the two traps were opened and placed in the bushes beneath our front window. My thought at the time was that no squirrel would come that near our house but I didn't question the methods.

WEEK THREE
The following week, the tech climbed into our tiny attic - the portal is small but the tech could access it easily. It's located above our washing machine which took putting a step stool atop the washer and me holding it so he could boost himself into the attic. I went outside to see the squirrel scamper out of the chewed hole on the side of our townhouse, run across my neighbor's roof, launch into a tree in her yard, scurry down it, and run into the common area.

This would be a wonderful victory, except Home Paramount doesn't seal breeches. And here's where I don't understand these companies. You're going to charge $625 for "unlimited squirrel catching" but have no policies to seal areas to prevent their return?! Buyers beware, friends.

At the time, I didn't have a tall enough ladder to reach to the second story roofline. Thus, I watched the furry freak climb the same tree and return to the hole before I could ever get a BB gun after him. On this same day, I had expected the traps to be reset - one clearly looked like it was tripped with its door half-lowered - and both to have new bait put in them. I called the corporate line to complain about the experience and when one of two managers couldn't be reached, they took my information. Within minutes, the same tech was calling sounding annoyed and curious as to why I had called the office or curious as to why I hadn't called him directly. I expressed my concern regarding the traps needing to be reset and he insisted he checked them. After a few more seconds, he begrugenly argreed to return later that evening to check the traps. He never showed.

The next day, we had a healthy conversation about my concerns of the trap functions and their location. He moved the traps under my neighbor's tree after I got permission from her. Thursday, January 16, one was caught! Could it be The One?! I doubted it. Calling the tech, he agreed to send someone out to collect it. The trap disappeared while I was running an errand. This left one trap - the one with the droopy door - in the yard. Before the day was out, that trap looked like it had been tripped closed. Since this was the end of the week, I knew how this would play out. No functional traps in the yard for the weekend but they are supposed to be closed anyway.

WEEK FOUR
Monday - MLK Day, I didn't expect anyone to come out. Tuesday, I expected a new trap and old one to be reopened - but nothing happened before the snowfall began. Wednesday - snow day. Thursday - called tech to inquire about next steps of which I knew there were few do to snow on the ground. He claimed he'd reset the traps on the coming Monday and that we would need to coordinate sealing up the holes when the squirrel was driven out.

WEEK FIVE
No tech has visited, opened the remaining trap, or replaced the retrieved one. A day or two had inches of snow on the ground.

WEEK SIX
No tech has shown up, opened the single remaining trap, or added another one. A day or two had inches of snow on the ground.

WEEK SEVEN
We are now beginning the seventh week with no resolution in sight. While I think the tech is a friendly fellow and likely skilled at what he does, I have not received $625 worth of service. Instead, I feel like I've made numerous inquiries and requests, seen no initiative at resolving my problem, and the squirrel(s) continue to make attempt to make breeches in my ceiling.

I don't want another phone call or discussion. I don't care if one or ten traps are set. At this point, I just want a consistent plan worked or refund at least some of my money. I just want this problem resolved. After all, this is why you pay companies for service - so you don't have to worry about it!

So, whatever happened with that squirrel? It's driven me nuts. Certifiably.