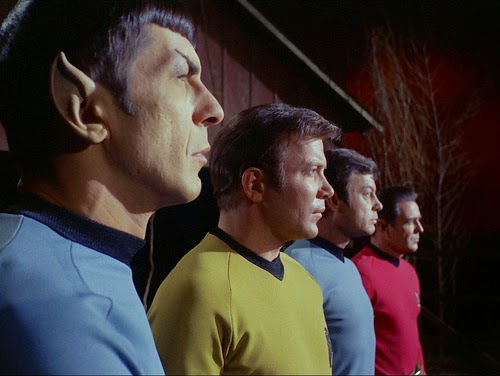 Leonard Nimoy, the multi-talented man who simply was Mr. Spock, is dead at 83. In many respects, one cannot think of Star Trek without thinking of Spock. His character was somewhat replicated in other series such as Voyager and Enterprise but no one could compare to the original Vulcan.


Recently, I introduced my daughter to Star Trek. She already has a love for Star Wars but to truly appreciate Star Trek requires starting with The Original Series. We've watched over a dozen episodes of the first season. Her favorite character is Spock. She enjoys "his look" with raised eyebrow often directed at Kirk and his moments with women. "They do a lot of kissing in Star Trek," she said. One can't deny that Kirk was a lady's man.

Whether or not there were plans to include him in the next reboot movie, it's delightful that Spock made appearances in the two reboots as well as The Next Generation. Few actors can obtain such an iconic role in the hearts and minds of people.

I chose the image of this post as it featured the main characters of TOS. Spock, Kirk, Bones, and Scotty. Of them, only Kirk - William Shatner - is still with us. We are fortunate to still have Nichelle Nichols, George Takei, Walter Koenig, and Grace Lee Whitney. Screen treasures and more.