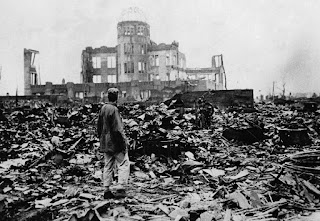 70 years ago, an atomic bomb was dropped on Hiroshima after Japan refused unconditional surrender in World War II. This decision was also made because more American lives (two or three times more than killed from the bomb) would be lost in an assault on Japan.

Seeing protests about this makes me shake me head. Protesters have that freedom because of the atomic bomb and the one that followed a few days later. Also, that freedom exists because so many soldiers paid for it in their blood.


War is hell. It should be the last resort but sometimes it must happen. While it's wise to strive for peace and diplomacy, a nation should be prepared to defend itself. Perhaps these protesters are trying to avoid such destructive weapons from being used. Indeed, everyone loses should nuclear weapons be used.

But what disturbs me is if some feel there were other options 70 years ago. As if dropping those bombs was a rushed or easy decision or that only military targets should've been chosen. Second guessing is easy to do years removed from a situation.

History should be a teacher. It should not to be forgotten or ridiculed. Outcomes could possibly have been different but changing history is impossible. "Those who cannot remember the past are condemned to repeat it." - George Santayana, The Life of Reason, 1905.