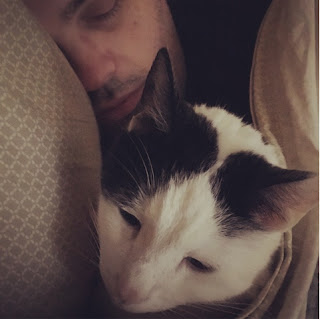 The death of someone special or close is tough, but it seems even more so when that death is around Christmas. Of all the holidays, losing someone at this time is hardest. On Christmas Eve morn 2016, my family said goodbye to Bones the cat.


Kim found him around 14 years ago in a rough neighborhood in Jackson, Mississippi. She was helping provide meals to volunteers of a World Changers construction ministry. While going to check on some students, she was met by them shouting, "Miss Kim, Miss Kim! You have to help this kitty! He's sick!" In the backyard of one the homes, the students had come across a litter of feral kittens. Bones was the only kitten they could catch. Kim placed him in a box, and one of the students thought she should ask the owners of the backyard if she could take him. The owner's son said she could take as many as she wanted.

At the vet, Kim was in tears because of how pathetic Bones appeared. The vet staff said they would find a good home for him, but by that time I think Kim had already decided he was family.

How did he come by the name Bones? When I met him, the picture below is what I saw. He looked and felt like a bag of bones. With the white fur and my love for Star Trek, it was clear his name had to be Bones. 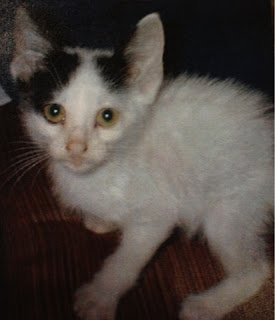 I recall him taking a liking to snuggling with me and kneading my right chest. He never stayed long but this was nearly a nightly ritual for us since he was a kitten.

As he grew, it was obvious that he wasn't going to be a full-sized cat. Perhaps it was his breeding or malnourishment but he became known as our "little man." He was also the most skittish cat. He often slinked around as if thinking something was going to jump out and grab him. The only time he didn't seem nervous was at bedtime when the lights were out. Maybe he felt he had more control then and that nothing was going to surprise him. He often jerked when he was touched by surprise and even when he knew he was going to be picked up. I considered him a "Chihuahua Cat" thankfully without the random peeing.

Bones was "my cat" partially because he and I made up the only testosterone in the house.

Fourteen years and some change is a good life for a cat. I miss having my "little man" around.