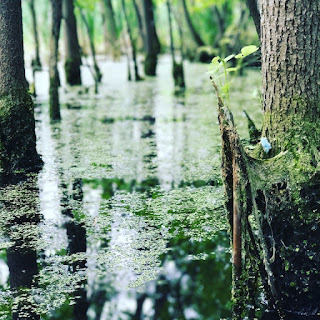 Did you know you can find clarity from swamps?

I shared recently with a friend who is processing a difficult situation that he and I were in our own "swamps." It's difficult, frustrating, confusing, easy to get bogged down, scary, and has lots challenges. But if we weren't there, we would never learn what the Lord is trying to teach us.

I grew up writing poetry and short stories. Writing is what I've loved since middle school. Just before 10th grade, the Lord introduced me to broadcast radio. Never had I considered working in radio but what kid in the late 80's didn't like radio and have their favorite DJs?! I used my writing skills there and developed a love for audio production and voice-overs. I figured the future held my becoming a General Manager of one or several Christian radio stations. Radio seemed to be where He wanted me. All the while, I was self-learning web development.

However, the Lord led me into broadcast television where I used my love of writing, production, and continually growing web skills but also I discovered a love for video editing. Putting pictures with sound, aye, Lord? Ok, I see what You're doing! So, TV is where You want me! And to grow that experience, He brought me to Washington, DC, to build an online department at WUSA9 and manage a staff. While my online skills grew, my production skills went on the shelf and my writing became more memos, documents, and process.

When it was time to move on from there, all of my broadcast skills and the more focused online skills led me to AOL. Again, not what I was expecting or considering but I could see how the other jobs led me there. Little did I know going to AOL would be an answer to prayer for a few folks. That job grew from program management, to project management, to to nearly product management. These were fields I never considered going into but were where my skills naturally fit. For example, the memo, document, and process writing along with the building and leading a staff at WUSA9 helped my project management, mentoring several creative personnel, and interacting with other teams.

So, what's next? I honestly do not know. That has been unclear for almost three months. Is it Digital Project Management? Something entirely different? This is why I'm in a swamp right now. I know that He'll lead me out of it and I'll be better for it.

This is also true for you, friend, if you find yourself in a swamp. It's perfectly fine to be there! Regardless what others may say, you are not less a person for being there! Just don't stay there. Trust in Jesus to be your guide. He'll never leave you or forsake you.