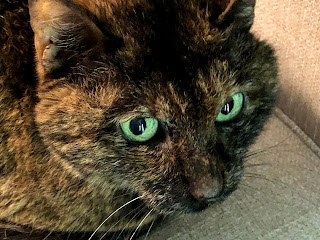 We called her many names over the years. Allie-rat. Monkeyface. Georgia called her "Baby Kitty" which was funny calling an 18-year-old cat a baby. With her passing, the last piece of living Mississippi in our house was lost.

Allie moved with us to Maryland from Mississippi. She and Bones flew with me on two separate return trips to Baltimore from Jackson. Maddy the Beagle rode with us in the Honda Accord. Now, all three of those furbabies have passed away.

Allie was a unique kitten and the last of a litter from a momma kitty adopted by a country radio station, Miss 103, in Jackson, Mississippi. A mutual friend and DJ reached out to Kim and me, knowing we were animal lovers and hoping we could help her get the last kitten adopted. The momma wouldn't let the kitten nurse because she chewed on her nipples too hard. One family returned the kitten because the children thought she was too ugly.

Of course, we took her in. Reminding us of an alley rat - that became her name. Good ole rat-tail Allie. I could put her on my shoulder and she'd stay there as I walked around. She was uniquely comfortable with that position.

When she was young, I remember Kim calling me at work. She was in a panic. Allie's whole body seemed to be burning up and she wasn't responsive. The vet recommended giving here half a children's Tylenol. Although the fever went down, we joked for years that the episode "cooked her brains" because sometimes she'd seem lost in thought and her eyes almost seemed to roll around in her head.

Allie joined us when we had PJ the tabby. After he passed, she was soon joined by Bones and would show him the ropes in Mississippi and in Maryland. They were good pals. Her last recruit, Percy, she only knew a few months. They at least grew to tolerate each other enough to sit in the same chair.

Monkeyface had the loudest meow. If things were not to her liking - food or water wasn't waiting or the litter box wasn't just so - she would let you know about it. And if the litter box went another day, not to her satisfaction, she usually left a happy, shiny turd in the hallway.

I joked that her spite kept her alive all these years. Next month, she would've turned 19.

Allie, you were a good baby kitty.