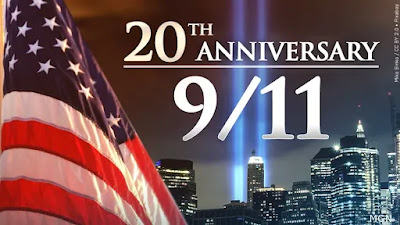 On this 20th anniversary of the September 11 attacks, I'm posting below a story I wrote on the 10th anniversary. These are my reflections on that day.

Looking at the first paragraph, it's interesting how times change. No one has asked me questions of where I was or what I was doing. I'm not sure if many of us have forgotten but more likely we're so very distracted.

We've navigated almost two years of a pandemic that's taken and changed so many lives. We've navigated political and cultural changes poorly and emotionally to the point of creating more divisions.
We are not the country we were the weeks and months after 9/11. The bipartisan efforts then were refreshing. The amount of American flags flying proudly and in solidarity was inspiring. Today, it seems many despise their own country and its flag. But even this is not new. While she has stumbled over the years and will continue to do so - America will always be the most amazing country in the world. It will remain the land of the free and the home of the brave.

The question has been asked countless times this week: Where were you? What were you doing? Each year, I reflect on my answer. This year, I'll share it here.

That Tuesday morning commute into WJTV in Jackson, Mississippi, was a pleasant drive. The weather was also pleasant. Clear skies and 71 degrees. The radio mentioned something about a plane hitting the World Trade Center. My mind pictured a small aircraft such as a Cessna. With my being responsible for the content on WJTV.com, I wanted to get to my workstation and get it powered quickly. This likely would be a significant news event.
I had to pass the newsroom before heading to my office. Video monitors showed smoke billowing from one of the two towers. I rushed down the hallway, unlocked my door, and began powering up my workstation, monitors, and video decks.

After launching a breaking news update on WJTV.com, another reported plane crash on the other tower. These were no accidents.

I walked into the newsroom just as reports were coming in about smoke rising from the Pentagon. Video monitors showed the evidence.

"We're being attacked," said Darren Dedo, the morning anchor. He was sitting at his workstation, gathering information before going back on-air. A sickening feeling covered me. I agreed with my friend and returned to my workstation. I remained there for rest of the day.

Maybe I went next door to the kitchen for coffee or water. I'm sure there was a potty break or two. Between encoding video, listening to reports, scanning for as much data as possible...the day was a blur. Breaking news seemed a trite term. Every update was breaking. Every moment was waiting for the proverbial other shoe to drop.

It's fascinating to me how much technology has changed the news industry since September 11, 2001. There was no YouTube, no Facebook, no Twitter. TV stations barely had a grasp of the power of the web. WJTV owners, Media General, had created an Interactive Media Division. Each station had one IMD employee to help evangelize the power of the web to newsrooms and TV stations built on the power of TV. The web was still new media and posting stories and video was an afterthought at best.

All IMD staffers encoded in RealVideo. It was king at the time. Videos were made to play on 14.4k and 56k modems. Dial-up, baby. Oh yeah. After all, high-speed internet access was the future and not our market audience. Upon encoding and trimming the video clips to the desired content, the files were FTP'd to our RealVideo streaming servers. Then I embedded links into stories.

This was a visual story. Images could tell some of the story. Video would capture the raw emotion, the tragedy, the unrelenting horror of that day. So, I captured all I could. Posted all I could. All the while trying to not be too emotionally distracted.

I prayed a lot that afternoon. Sought His wisdom and guidance. Rested on the fact that He was and still is in control. That all things happen for a purpose far greater than we can comprehend.

What I experienced that day was only slightly different than others. While many people could barely take their eyes from national broadcast news television coverage, I was doing the same but also repackaged those images, video, and words for others to absorb.

Yet, that experience compares nothing to what my friend and former colleague Mike Walter went through as a journalist. I would come to know Mike years later when I came to work at WUSA in Washington, DC. Getting to know Mike, I would hear of how he and other journalist saw the airliner impact the Pentagon. In the documentary "Breaking News, Breaking Down" Mike peels back the veil of the secret and painful suffering for those who report on the slices of hell we see from the comforts of our home.

We can forget a great deal, debate pointless topics, and try to place blame on multiple levels. But we must never forget that 3000 lives were lost that day. Each of those lives touched countless others. And even in death, some of those lives continue to teach...to love...to remind us of how valuable and special human life truly is.