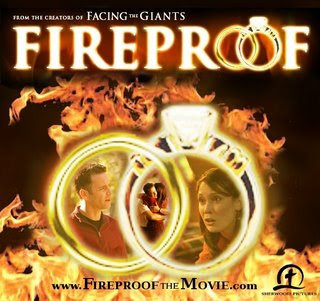 It's not often a movie is labeled wholesome, uplifting, inspiring, and challenging. That's a very tall order for any movie to deliver. Yet, "Fireproof" satisfies that order with healthy dashes of drama, action, and comedy.

The plot is simple. Captain Caleb Holt (Kirk Cameron) is a well-trained firefighter and knows how to quickly respond to an emergency. However, he doesn't know how to communicate with his wife and doesn't know his marriage is in serious trouble until it's too late. Caleb seeks a quick fix to his wife Catherine (Erin Bethea) and their marriage by seeking some fatherly wisdom. His dad, however, offers him a challenge that will shake Caleb to his very core.

"Fireproof" goes beyond tackling how to better one's marriage by touching on internet pornography and seemingly innocent flirting...something that's touched everyone on one degree or another.

My general rule of thumb with movie prices around $10 these days: it's gotta be a blockbuster full of eye candy for me to see it in the theater. "Fireproof" is an exception because it's a rare chance to support such a rare film and a ministry. Too often Hollywood forgets that people no matter their faith will go see wholesome films. I always enjoy a movie experience where the theater applauds loudly at the end.

My advice to you is to see this movie. If you're married or thinking about ever getting married, see this movie. And see it with friends and couples you care about. Additionally, the book featured in the film is worth at least a husband going through but it's written so that a either a husband or wife can go through it.

Never leave your partner behind.