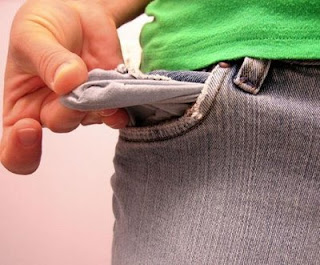 It's a phrase you've either heard before but never experienced, you've been there/done that, or you're there now: living paycheck to paycheck. It's not something many talk about...whether out of pride or just that they know the season will pass.

For us, the financial squeeze came into play in August when we had to pay for both Georgia's then daycare at USDA and start paying tuition for her school at First Baptist School of Laurel. To add to the equation, I took a pay cut to work at AOL with the knowledge that at bonus and raise was in the future. However, instead of end of year, the bonus isn't coming until late February.

We make sacrifices for our families. For us, sacrificing a couple thousand dollars was worth a job change that has vastly improved our family life. Cutting back on things so Georgia can have a Christian education was also paramount. Like too many young couples, we have some debt to eliminate. It's a slow process but it is progressing.

The deadly snare is when some families refuse to change their lifestyle and sink deeper into debt because they have to have the trips, the entertainment, and more. I'm not boasting, since Kim and I have been a bit unyielding at times. But the blessing is how God continues to mold and shape and nurture us into what we need to become.

So, I'll enjoy my soups for lunch and anything else low carb as we press on towards better financial and physical health.