Change For The Sake Of Change 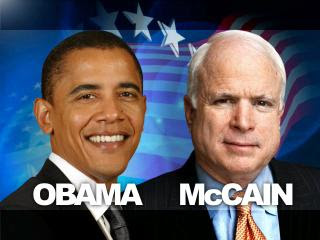 In an earlier post, my words reflected my disinterest with politics. This is a rather intriguing stance being as we're at the political hub of America. However, with the Presidential election looming closer and closer my interests have intensified. With this election, we as a nation are at a crossroads.

Never before has our country seen its morals so decomposed. After all, our focus today is completely on satisfying our selfish needs while never offending anyone. Women should have the right to terminate their pregnancy whenever they want. After all, Senator Obama thinks that when life begins is "above his pay grade" and House of Rep. Speaker Pelosi thinks this debate has been going on for years in the Catholic church.

Also, let's push for gays to have the rights to marry. Forget the fact that they already have civil unions and other partner rights offered by businesses. No, men should marry men and women should marry women. Last time I checked, a marriage is composed of a husband and wife. So, who's the husband and the wife in a gay marriage?

What's funny here is anyone feeling this way is dubbed insensitive, discriminative, or hateful. Because this opinion is different? Because I don't share your views? Because the Bible defines marriage as between one man and one woman? What folks seem to forget is that one can still love another person but disagree with their opinions, views and even their lifestyle.

That's right, being a mature selfless person means you can love and care for someone while disagreeing with their views, opinions, or lifestyle. You love the person not their choices.

Ah, but then we hit the real nail: gays didn't choose to be gay, they were born that way. I believe people are born with disabilities that either kill them or mature them into the people God designed them to be. So, can one be born gay? No. I believe this is a choice that grows out of one's surroundings: environment, experiences, experiments, faith, and conditions of their heart. Any one one of us could be gay but our surroundings helped define who we are.

Love is a choice.

Now, let's get back to how selfish we are as a country. Freedom means that everyone should have the right to do what they want, when they want, and how they want to, right? Sounds like an existence without discipline. Ever been to a restaurant or a store where children are running around wild doing whatever they want? There's a time and place for fun. That example shows the parents aren't exercising discipline. Now, imagine a country full of whiny, needy, and loud adults. Sounds like we're already there, aye?

Whether you share my views, morals, my disinterest in politics, or easily surpass me with your tenacity in these areas, I hope these words will inspire you to "think" instead of "change."

The reason everyone is so fired up about "change" is because many feel the Bush administration has led this country down the wrong path. Senator Obama is the anti-Bush. Young, handsome, eloquent speaker, intelligent, and black. Not only is he everything President Bush is not, this is also a chance to get a black man into the White House.

Meanwhile, Senator McCain represents the last 8 years only because he is Republican and is much older. Adding Governor Palin to his ticket really shook things up because now you have a vibrant young woman (another political salivating point) who can not only take on Senator Biden but also has more experience than Senator Obama. But if you support the McCain-Palin ticket, you are dubbed a racist, ignorant, or part of the Christian Right.

Oh, yeah, I have a different opinion than the alleged "majority" or the "entire country."

But the low, that really inspired this post came with finding the link of children singing about Senator Obama as nearly this Christ-like savior of the world who will bring about change for America and make this country respected in the world makes my stomach churn. That's a tall order for any one man. Especially for a man with no experience who can't even speak well without advisers or prepared speeches.

Senator Obama is an abomination. He is absolutely the worst possible choice for this country as a leader. I'm sure there are just as many who would say the same about McCain. However, I'll take someone with experience and who was a POW over a slick-suited, hot-aired windbag any day.

Let's face it, in the political realm youth will support a young candidate and rhetoric of change...women will support a woman...and blacks will support a black. I would support whomever matches my morals, regardless of the party, sex, or skin color.

So, in this election season, I would charge you to vote your morals and beliefs. Don't buy into the rhetoric and the polls and the other voices. Pray about discernment in this area and vote for the person who matches your values.

Other resources to consider: