Politics and Religion: Knowing Little But Never Being Wrong 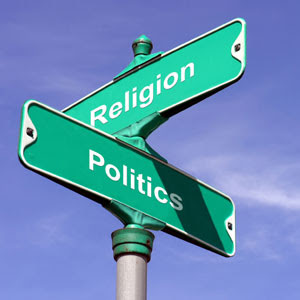 You may have heard the age old axiom from your parents. "Never talk about politics or religion." My guess, this was a mantra to avoid uncomfortable dinner parties 30 years ago. Hard to believe but people actually met IN PERSON to talk and catch up, instead of sitting at their computers or using their phones to text and tweet.

Not bringing up the topics of politics or religion, especially when in mixed company, helped keep everything pleasant and calm. Few chances for awkward moments when talking about the weather, food, kids, and the lawn.

But why are people so passionate about these topics? Why do they cause such conflict in discussions?


Simple. Selfishly, no one wants to be wrong.

Take it back to Adam and Eve. After Eve listened to the serpent and God confronted both Adam and Eve about what they had done, what's the first thing they do? Blame someone else.

Genesis 3:12-13: "The man said, 'The woman you put here with me—she gave me some fruit from the tree, and I ate it.' Then the LORD God said to the woman, 'What is this you have done?' The woman said, 'The serpent deceived me, and I ate.'"

You see, if you blame someone else, you're not really at fault. It's far easier to blame your parents or your neighborhood for your personality, fears, or habits today. More excusable that your spouse is unloving and ignoring your needs as why you had an affair. More palatable to blame your schedule, time demands, or stress on your poor eating habits.

Larry Ross, President of A. Larry Ross Communications, articulated this point well. "Sin is a word so seldom used in our culture that society has almost lost any point of reference from which to acknowledge or embrace the concept. In an effort to rationalize away bad behavior, immoral activities are often downgraded to mistakes and indiscretions, or responsibility blame shifted to one's upbringing or another individual."

Since we're talking about Scripture and faith, a great example of not wanting to be wrong with religion can be found with Brit Hume's humble suggestion that Tiger Woods embrace Christianity.

What has his suggestion to Tiger produced?


Yet, many had positive reactions:
No one wants to be wrong. You either believe the same as Brit Hume - that Jesus Christ is the way, the truth, and the light and that no one comes to the Father but through Him...and Tiger needs to ask forgiveness for his sins to receive Christ's forgiveness and love - or you believe there are other ways to do this. Forget whether or not Hume should've shared the advice at that time, on that program, or in his role. You either believe what he said is correct or wrong.

Talking religion can travel down many side-streets but ultimately the foundational question to be answered is do you believe the Bible? From there, one can debate the depth and maturity of their belief, what's shaken or strengthened their faith, and more. But, again, no one wants to be wrong.

While some restraint may be used in disagreements with religion, discussions of politics can simply turn ugly. Without spending time collecting links and sharing stories on this topic, one could simply return to the 2000 Presidential Election to highlight the division of the country's opinions with the narrow victory and all the voting issues. One could examine the erosion of bipartisan and American solidarity that had been so rampant in President George W. Bush's first term to it's decline in the 2004 elections to the vicious, evil, and hateful venom spewed at the Bush Administration through much of its second term.

Flash-forward to today with topics such as health care reform, T.E.A. parties, stimulus bills, bailouts, czars, and so much more. The political landscape seems maddening.

But beyond not wanting to be wrong, people know little about the politics and religious subjects of which they fume so passionately. We want to be on the winning team and to have our beliefs and opinions validated.Yet, we don't spending enough time in Scripture and prayer or accepting a personal relationship with Jesus Christ. Or we listen to only one political source of information without researching the topic or aligning it with our moral beliefs.

America has lost something.

Instead of being about to debate or discuss, we readily argue like little spoiled, selfish, undisciplined children. Everything is drama. Everything is an argument. Emotions and tempers flare and nothing is resolved. At least with a debate or discussion, two parties can walk away possibly learning something new. At the very least, the two sides agree to disagree. But little is learned from arguments. The goal is to hurt and see which side can not listen to the other and shout the loudest.

We don't want to be wrong. We don't want to learn enough to realize if we're right or wrong. Politics, politicians, and Presidents won't save us. But faith in Christ will. In Him, you won't be wrong and you'll always know little...but He'll keep growing you...if you're willing to be willing.