Squirrel! Part 3: Attack of the Squirrel! 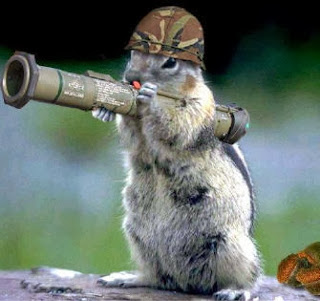 Tuesday night, I heard the sound I've grown to dread: scratching above G's ceiling. Exasperated, I thought, "After sealing the breech, we trapped the thing in there?!"

But this scratching didn't sound as close. It sounded more like it was outside. Upon investigation, there was indeed a squirrel trying to dig through the wooden patch. I clapped my hands - which hurt - and flailed my arms - which probably looked silly. I had to run it off three times before it disappeared for the night.

Then came early Wednesday morning. G reported scratching above her room. I assumed the rascal had returned. Upon inspection outside, the doom became clear: not only had the squirrel from the night before returned but also there appeared to be one still in the attic trying to escape!

The outside Sith Squirrel would work on the patched area trying to shred the wood until I spritzed him with hornet spray. He retreated to the rooftop and peered over the edge until I tried dosing him with more spray.

I'd return outside to discover he was now in the opposite corner where the downspout made a perfect seat trying to claw through the wood there! Again, spritzing of the hornet spray and taunting from the rooftop.

This dance continue for an hour. While I tried to begin work for the day, scratching would send me outside to find either one or both causing the noise.

I was now out of hornet spray and couldn't locate the clip to a cheap pellet gun. To add to the hysteria, some equipment in the distant background at some construction site sounded like a scratching noise from inside the house! I'd go outside to find neither squirrel doing anything!

This is when I fully grasped what madness looks and feels like: a 40 year old man with a swollen, beat up right hand shouting, clapping hands, and banging on downspouts every few minutes with his beagle barking at him every time he went outside. I was going truly insane.

Thankfully, a neighbor had a BB gun. It's been too long since I had a Daisy. Finally, victory would be mine!

Scratching brought me outside to see the accomplice as he stopped shredding the patch to perch on the roof and stare at me. I took aim and squeezed the trigger*. He ducked back. If I hit him, he made no sound. I was thinking the arch was too high.

Again, he appeared. Again, I took aim, fired, and he ducked back. This time I heard the BB roll back towards me off the roof. He didn't appear for my third-time's-the-charm shot. Uncertain if the other squirrel was still in the attic, I periodically checked the opening that had been made partially from tearing away the patch board and partially the house! The first time she stuck her head out, I positioned myself for a clean shot. Pop! Debris went flying in the blackness of the hole. Had I struck her? Perhaps. I lobbed three more shots into the blackness.

This war is far from over. Sleep well, little vermin. You'll be in my sights come morning.

*What's remarkably sad is the ordinances in place in Howard County, MD where "guns" mentioned below means "Any firearm, rifle, shotgun, revolver, pistol, air gun, air rifle or any similar mechanism by whatever name known which is designed to expel a projectile through a barrel by the action of any explosive, gas, compressed air, spring, or elastic."

So, at first glance, I'm in violation of county ordinances by even firing this air rifle and could be fined $1000 or go to jail for 6 months. And yet, discharging this gun to protect property from a dangerous animal seems to apply. When an animal is shredding your house, that qualifies as dangerous in my book.