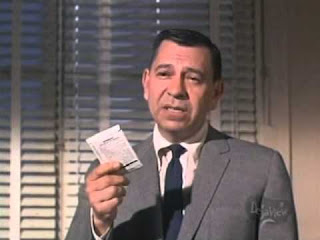 Dragnet was on television before I was born. Its first season aired in 1967. Since then, other reboots and a movie attempted to keep the character Joe Friday alive. For me, Joe Friday is Jack Webb. An actor and producer, Webb wanted the show to have realism and unpretentious acting. The show captured the boredom and drudgery of police work along with the danger and heroism. It also helped improve public opinion of police officers.

If we ever needed Joe Friday, we need him today. While police are stereotyped as violent, corrupt, and racial profiling, some are being senselessly murdered. It feels like a sad time for our men and women in blue.

I love the clip below from "The Big Interrogation" which aired on February 9, 1967. Almost 50 years old, the description Joe Friday gives of police, detectives, and their lives is powerful, relevant, and should instantly earn a police offer respect.


There was also the episode "The Big Departure" which aired on March 7, 1968. (In case you're curious, in Dragnet's four seasons "big" was included in 19 other episode titles.) Again, this clip is timeless as so much of it can be applied to today.


Thanks, Joe, for being on duty.